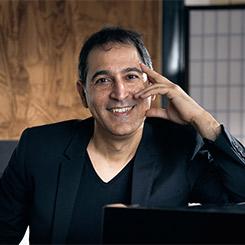 Program note:
In YE-DID-BACH I incorporated segments of Bach’s preludes and fugues from the Well-Tempered Clavier to create integration between various aesthetics and systems of the past and of our time. In some cases, I re-wrote segments of Bach’s music and in other cases I made adaptations of longer parts.

Márta was the wife of György Kurtág, with whom she performed for 60 years! They often played from his collection Játékok.

György Kurtág, with whom she performed for 60 years! They often played from his collection Játékok.

About the composer:
Yitzhak Yedid (PhD) is an award-winning composer, pianist and pedagogue. His interest lies in composing and performing concert music. Yedid's folio of compositions contains over 50 orchestral, chamber, solo and vocal works, published by IMI and AMC. Yedid's music has won several international awards, most recently, the prestigious Canadian Azrieli Music Prize, valued at over $200,000 CAD.

Yedid was born in Jerusalem and since 2007 he calls Australia home. He studied piano and composition in Jerusalem (Rubin Academy), Boston, MA (New England Conservatory), and Melbourne (Monash University). His expertise is in the integration of non-European musical elements, including improvisation, with Western practice. His compositions explore new forms of integrating classical Arabic music, Arabic-influenced Jewish music and contemporary Western art music.

Yedid is a Sidney Myer Creative Fellow. His awards include the top two prizes in Israel for classical performers and composers: the Prime Minister’s Prize for Composers (2007) and the Landau Prize for Performing Arts (2009). Yedid was also awarded a composer-in-residence position at the Judith Wright Centre (Brisbane, 2010) and at the Western Australian Academy of Performing arts (2008).  Currently, Yedid is composer-in-residence at Gallop House in Perth (National Trust, Peggy Glanville Hicks Trust).

Inspired by literature, philosophy, art and landscapes, Yedid’s compositions form a narrative of pictures, textures and colours. His music incorporates a wide spectrum of contemporary and ancient styles and creates a unique integration between improvisation, Arabic genres and contemporary Western classical music. A confluence between the Maqamat (the Arabic music modal system), heterophonic textures of Arabic genres and compositional approaches of jazz and contemporary Western classical music have been created to produce an original sound.