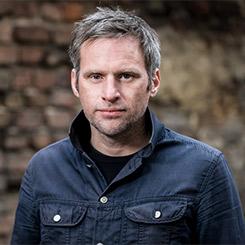 Performed at the ANAM Set Festival by
Nathan Gatenby (percussion)

Program note:
Rolando Continuo is made up of twelve rotations of oscillating major seventh and ninth chords in all twelve keys, modulating a minor third then a perfect fifth respectively.

‘Rolando’ is Italian for ‘Roland’, and is in reference to the music instrument maker ‘Roland’, whose fetishised sounds are used here; specifically sounds from the ‘Roland Juno 106’ (TM), ‘Roland 606’ (TM) and the ‘Boss Dr. Sample SP-303’ (TM) , ‘Boss’ being a division of the Roland Corporation. ‘Continuo’ is in reference to the chordal sequences found in baroque musical practice.

Rolando Continuo was commissioned by the Australian National Academy of Music (ANAM), as part of the ‘The ANAM Set’ (2021), and was written for Nathan Gatenby, whose input during the development of the piece was invaluable.

About the composer:
Thomas Meadowcroft makes orchestral and chamber music for the concert hall, as well as music for theatre and radio. His work has been described as “reaching an inexpressible purity” (Le Monde), “dreamy post-rock” (The New York Times), “never- ending, sugar-sweet” (Neue Zürcher Zeitung), “motorized nostalgia” (The Scotsman, Glasgow), and 'between academic schmaltz and avantgarde-pop' (Zitty Magazine, Berlin). Raised in Toowoomba, Queensland, Thomas studied composition with George Crumb at the University of Pennsylvania, and Brian Ferneyhough at the University of California, San Diego. Based in Berlin since 1998, he has also undertaken artist residencies at the Villa Aurora Los Angeles, Cité des arts Paris, the Peggy Glanville-Hicks Composers' House Sydney, and the Golden Vale residence NSW (courtesy of the National Trust of Australia NSW and the Bundanon Trust). His orchestral music has been performed by the BBC Symphony Orchestra, the SWR Symphony Orchestra and the German Film Orchestra Babelsberg. His chamber music has been performed by, among others, ‘ensemble recherche’, ‘Speak Percussion’, “Solistenensemble Kaleidoskop’, ’Yarn/Wire’ and the Grammy Award winning ‘Third Coast Percussion’. His chamber music has been presented at various international festivals and concert series including Carnegie Hall, the Chamber Music Society of the Lincoln Center, Lucerne Festival and Maerzmusik Berlin. A portrait disc of his percussion music was released on MODE Records in 2020.