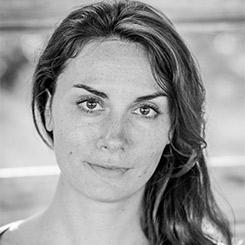 Pilgrimado
for viola and electronics
Composed for Ariel Postmus
First performance: 14 May 2022

Performed at the ANAM Set Festival by
Ariel Postmus (viola)

Program note:
The title and subtitles of this work are taken from the world’s most widely spoken constructed language, Esperanto. This language was created with the intention of becoming a universal second language and is currently the only such language that has a population of native speakers. When discussing the composition of this work with violist Ariel Postmus, for whom it was written, a mutual adoration of Scandinavian culture was a prominent part of our exchange. As such it seemed appropriate to write a piece that journeyed in and from that area of our global fascination.

About the composer:
Melody Eötvös (1984) was born in the Southern Highlands, NSW, Australia. From the age of five she studied piano and music theory under her parent’s tutelage and at eight began learning the cello which coincided with her first experimentations in composition. Her undergraduate studies were completed at the Queensland Conservatorium of Music Griffith University, with Dr. Gerardo Diriè. Commissions in 2020 included The Philadelphia Orchestra (USA), The Australian Chamber Orchestra, and the Grand Teton Music Festival Orchestra (USA). Future projects include collaborations with ANAM, MSO, Alex Raineri, and the Flinders String Quartet. Melody is a Lecturer in Composition and Aural Studies at the Melbourne Conservatorium of Music. Melody holds a Doctor of Music (2014) from Indiana University Jacobs School of Music USA, and a Master of Music (2008) from the Royal Academy of Music, London UK.