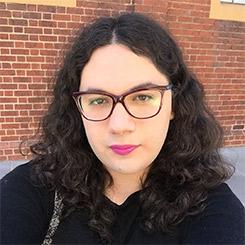 You Can Call Me CV01
for contrabassoon
Composed for Jye Todorov
First performance: 25 Nov 2021

Performed at the ANAM Set Festival by
Jye Todorov (contrabassoon)

Program note:
You Can Call Me CV01 is one half of a dialogue, specifically, the half performed by a human. As a standalone work, it features its own internal dialogue created  through dissecting and disconnecting a long melody with inserted ‘commentaries’ that feature a much wider sonic world than the traditionally contrabassoon-y chopped-up melody. This piece comes from an opera for Hatsune Miku, electronics and instrumental performers called The Second Sound of the Future which similarly explores ideas of sound, and the way we use objects, software, machines to transform, amplify and filter the sounds which we create from our human self.

About the composer:
Lilijana Maticevska is a composer fascinated by the perception of time as we listen to music. Her works are often inspired by politics, history, her own experiences in the world, but her biggest source of inspiration comes from a sense of community, collaboration and unique musical interests and musicianship of the performers she works with. Lili studied composition at the Melbourne Conservatorium of Music, taking lessons from Katy Abbott, Miriama Young, Elliott Gyger, Christine McCombe and Melody Eötvös. Lili’s music has been performed in Europe, North America and around Australia. Her composition Palimpsest was given its American premiere by JACK Quartet in November, 2019. After its world premiere in Hannover the previous year, she was described in the press as a 'mordlustigen [Australierin]'—a badge she wears with pride. Other recent commissions include Electric Revolution for the esteemed Thereminist Thorwald Jørgensen and the Acacia String Quartet, premiered at the Albury Chamber Music Festival in 2019; and Black Cat Sonata for guitarist Harold Gretton, premiered at the Melbourne Guitar Festival that same year. She has worked as a composer for ensembles and musicians as wide-ranging as Plexus Collective, Ziggy and Miles Johnston, Syzygy Ensemble, Melbourne Women's Choir, ELISION Ensemble and Musica Assoluta (Hannover).