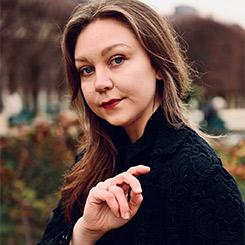 This piece is about two voices that each as altering points of perception. As one changes, the light upon the other changes with it, and the arc of shadow and stretches of light combine to create new forms akin to floating sculptures.

Music as sculpture is something that I am drawn to, in the sense that that material can become obstacles within a point of space and time. One element can be seen at an angle and viewed again after seeing more of the form, with this process in turn changing our initial perception of an obstacle that otherwise seemed permanent.

To lapse is often considered a negative consequence; here, I wanted to present the idea as a doorway – the lapse from one state, entwined with one perception, toward another. It is in the smallest of cracks on a dark surface that we see light at its brightest.

Lapse was written to consider the nature of process and change, embracing a constant flux between two bodies to embody a sense of unity in the layers of perception that define us.

Inspired by a reading of Humankind by Rutgar Bregman.

About the composer:
Kirsten Milenko (b.1993) is a Paris-based Australian composer/conductor. Milenko received the 2021 Roche Young Commission, awarded by Artistic Director of Lucerne Festival Wolfgang Rihm, and is a laureate of Fondation Royaumont. In 2020, her debut opera/dance-theatre work Dalloway premiered at Pulsar Festival (Denmark). She was later shortlisted to create a new opera with the Mannheim National Theatre (Germany) with Bea Redweik (librettist) and Johan Klint Sandberg (director). Milenko studied composition at the Royal Danish Academy of Music (MMus class of 2020) with Niels Rosing-Schow, Simon Løffler, and Jeppe Just Christensen, and the Sydney Conservatorium of Music (BMus class of 2018) with Liza Lim, Natasha Anderson, Ursula Caporali and Rosalind Page. She studies conducting (CAS) at the Conservatorio della Svizzera italiana with Arturo Tamayo. Prior to her tertiary education as a musician, she studied International Relations and Piano at the University of New South Wales with additional studies in French and English Literature.She has attended academies and masterclasses with composers such as: Sir Harrison Birtwistle, Francesco Filidei, Dmitri Kourliandski, Catherine Milliken, Mark Andre, Zygmunt Krauze ,Martin Bresnick -and conductors: Johannes Wildner, Jessica Cottis, Mark Shapiro. Her upcoming premieres include works for Ensemble intercontemporain, the Ulysses Ensemble, Orchestra of the Lucerne Festival Academy, and Athelas Sinfonietta Copenhagen.