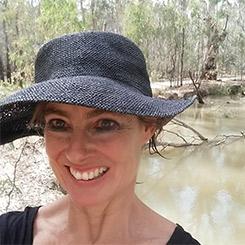 Performed at the ANAM Set Festival by
Nic Corkeron (trumpet)

Program note:
For the critically endangered Regent honeyeater, music and song are literally a matter of life and death. Accurate performance of the long and complex honeyeater song enables adult male birds to establish a nesting territory and attract a mate. But dwindling population density has also led to a breakdown of the species ’song culture, as there are no longer sufficient male birds to teach the song to the next generation.

This work explores parallels between the Regent honeyeater song and our human melodic culture. Rhythms and gestures are freely inspired by original recordings of the bird calls. The opening imagines the honeyeater singing in the wild, followed by a call-and-response in which an older bird passes the song to a younger one. The melody dies away, fading into a lament as the species plummets towards extinction. An optimistic conclusion projects a recovery of the Regent honeyeater, and its song culture.

At a time when so many species are threatened by habitat destruction and climate change, we wanted to reflect on our place within the natural world, and to acknowledge the value of life sustained through music.

About the composer:
Kate Tempany is a composer, tabla player and workshop artist. Based in Melbourne but born in the Riverina town of Echuca (Yorta Yorta country), Kate combines a passionate interest in the environment with a vibrant intercultural arts practice drawing on Hindustani, West African and Indian folk compositional idioms.

Her recent body of work, Monsoon Folio, explores a unique musical language both intensely melodic and densely percussive, which has been described as “Debussy meets Indian music.” Kate’s compositions have been premiered by leading Australian musicians such as Michael Kieran Harvey, Joseph Lallo, Tim Munro, the VCA-MCM Brass and Percussion ensembles in collaboration with Peter Neville, and Speak Percussion with ArtPlay performers.

Kate has appeared in Scandinavia as support act for the Western Arnhem Land Indigenous troupe White Cockatoo, in India and across Australia in settings from Woodford Folk Festival to Bennett’s Lane. She has used intercultural composition, percussion and dance as tools for community development over several decades. Kate has studied a wide variety of subjects at tertiary level, from physics and vector calculus to social theory, Hindi and Sanskrit. Right now she is learning Arabic.

Kate is a recipient of the Australian Government Endeavour Award and the Catherine Mary Sullivan Scholarship in Music Composition, and was the 2019 Grainger Composer in Residence. She has just completed an M. Mus (Composition) with first-class honours at Melbourne University.