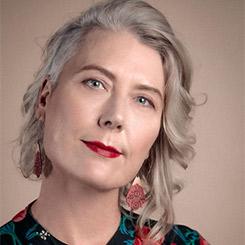 To The Sea
for violin
Composed for Adrian Biemmi
First performance: 14 May 2022

Performed at the ANAM Set Festival by
Adrian Biemmi (violin)

Program note:
When Adrian and I first met at the start of this project, I asked him what he would like our piece to be about. He immediately said ‘the ocean. ’ I embraced this idea, and as I explored it, found that possibilities for musical allusions to this natural force proved plentiful. The piece starts on the ocean floor; picked up in an underwater swell; awakened by the echoes of a long-drowned sea shanty; borne on a current that grows more insistent until it bursts through the surface to catch a lungful of air. The sea shanty arrived during my composition process and would not leave; a folky, 6/8 tune that provided structure for the rhythmic and harmonic material I weave through the work. This motif is framed by descriptive interpretations of the sea, where wave shapes start playfully lapping against the shore, their mellifluous patterns increasingly jagged and out-of-control, crashing in peaks, then evaporating like ocean spray while gulls cry.

To The Sea was an absolute joy to work on, with Adrian’s input invaluable to ensure a natural, idiomatic work for solo violin. I love that it reflects the playfulness of our collaboration as we navigated various digital platforms from one side of the country to the other through lockdowns. Our shared understanding and aesthetic was remarkable – as was our fortuitous mutual desire to include a nod to Berio’s extraordinary Sequenza for violin somehow in the texture of this piece. It is dedicated to Adrian Biemmi – with my fondest respect.

About the composer:
Felicity Wilcox is an ARIA and AACTA-nominated composer and academic whose output encompasses concert music, film music, songwriting and improvisation, music for theatre, installation, live events, dance and radio. She has received commissions for many leading ensembles, including The Australia Ensemble, Ensemble Offspring, Ironwood, The Song Company, Decibel, and the Australia Piano Quartet. Her compositions are performed and broadcast in Australia and internationally, including being selected for TURN UP Festival, Arizona (2021); Philadelphia Orchestra’s ‘WomenNOW’ (2020); ABC Classic's ‘Women of Note Vol. 3’ digital release (2021); Sydney Festival (2019; 2020), Canberra International Music Festival (2017; 2019), and Vivid Sydney (2014). Felicity’s background as a screen composer informs her concert practice. She was the first woman to be nominated for an AACTA (AFI) Award for film composition in Australia. As Felicity Fox, she has worked extensively as a composer and music director, with a highlight being her role as Assistant Music Director and Composer for the Paralympic Games opening Ceremony in Sydney 2000. She has composed the soundtracks to over 60 screen productions, for which she has received international recognition - winning the FIFREC Film Award (France), winning/being nominated for several APRA/AGSC Screen Music awards, receiving three AACTA nominations, and an ARIA nomination. Her soundtracks are broadcast on major television networks and in international film festivals.Felicity was awarded a PhD in composition in 2013 from Sydney Conservatorium of Music. She currently holds a position as Senior lecturer in Music and Sound Design at the University of Technology, Sydney.