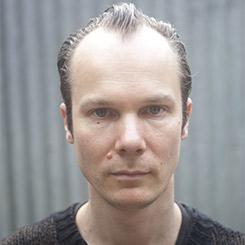 Performed at the ANAM Set Festival by
Nick McManus (cello)

Program note:
Heiligenschein for cello and electronics is a short study on the idea of the aura of the past haunting the performer. It uses two well-known recordings of the Prelude from JS Bach's Cello Suite No. 1 to generate a spectral halo. These recordings, remaining inaudible themselves, served as the raw material for the electronics part, which listened to them and arbitrarily chose to produce various overtones from what it heard. This texture is subtly coloured by the performer, who obsessively repeats an open G string for the entire duration of the piece, subtly varying the contact point of the bow to excite different overtones of this fundamental. It becomes a kind of absurd ritual, like a search for the perfect beginning, or faithful repetition.

The title Heiligenschein (German for 'holy light') is taken from the optical phenomenon of seeing a halo around one's shadow in certain conditions, where dew droplets reflect and refract the light coming from behind the observer. In this work, it becomes a metaphor for the way a performer is caught between ideas of self-projection and fidelity to the original, all the while bathed in the inescapable afterglow of the historical canon.

Erkki has been commissioned by the Adelaide Festival, Vivid Festival, Australian Art Orchestra, Sydney Symphony and Musica nova Helsinki, and his works have been performed by groups such as the London Sinfonietta, defunensemble and Sydney Symphony Orchestra. He composed the orchestral works for Gurrumul's posthumous album Djarimirri, which won 4 ARIA Awards and the 2018 Australian Music Prize. In 2019 ROOM40 released his Ganzfeld Experiment for electric violin and audiovisual processing, described by The Quietus as 'an exquisite form of mysticism'.

Erkki has performed with the Australian Art Orchestra, Australian Chamber Orchestra, Berlin Philharmonic Orchestra, Elision and Ensemble Modern, and he maintains active collaborations with musicians Genevieve Lacey, Scott Tinkler and Anthony Pateras, and visual artist and film maker Sabina Maselli. He has also performed and recorded with many other musicians from a broad range of styles and backgrounds.

Erkki is a recipient the Melbourne Prize for Music 'Distinguished Musicians Fellowship 2019' and a 2013 Myer Creative Fellowship. He was an Artistic Associate of Chamber Made Opera between 2013-2016.