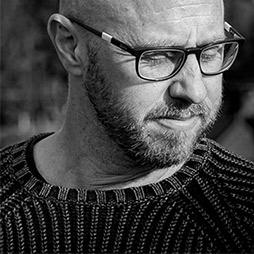 Performed at the ANAM Set Festival by
Josephine Chung (violin)

Program note:
Touch Point is an etude for solo violin exploring the intimate tactile connection between performer and instrument. The cyclic and repetitive work is characterised by a stream of unbroken tones oscillating perpetually between firm and light touch. The metaphor of touch also reflects my ongoing interest in the phenomenon of frisson - goosebumps or ‘aesthetic chills ’- that connects the sensations of touch and the experience of music.

About the composer:
Damien Ricketson is a Sydney-based composer, artistic director and academic. Ricketson’s highly visceral work is characterised by unusual instrumentations, open forms and is often multi-sensory in nature. From 1995-2015 Ricketson was the co-founder, and Co-Artistic Director of Ensemble Offspring, a unique arts company dedicated to adventurous new music through whom much of his music has been performed. From 2015-2019 he was the Program Leader of Composition at the Sydney Conservatorium of Music, University of Sydney. Ricketson studied composition at the Sydney Conservatorium of Music and The Royal Conservatory of The Hague with renowned Dutch composer Louis Andriessen. He holds a PhD from the University of Sydney where he currently teaches. Many of Ricketson’s more substantial works have been show-length staged productions including: The Howling Girls (2018), an opera co-created with director Adena Jacobs exploring trauma and the voice presented by Sydney Chamber Opera; The Secret Noise (2014), a hybrid music-dance work; and Fractured Again (2010), a multimedia production featuring musical instruments made of glass. Ricketson has received numerous awards including the international Music Theatre Now Prize (2018) and ‘Vocal/Choral Work of the Year’ in the 2019 Art Music Awards for The Howling Girls, as well as the 'Instrumental Work of the Year' in the 2015 Art Music Awards for The Secret Noise. His works have featured in the Sydney and Melbourne festivals, toured Europe and Asia and represented ‘Oceania’ in the Tokyo World Festival.