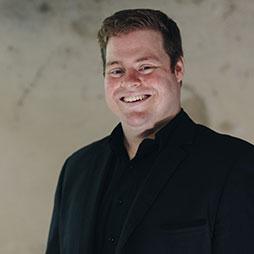 If you’ve chosen to become a freelance musician, your exceptional skill on your chosen instrument is the foundation for a successful life in music. In some ways, though, it also means you’ve only reached first base. There is a lot of talk right now about “the musicians of the future” and how versatile they will need to be, as audiences for classical music change and the presentation of live music evolves.

In this brave new world, Stewart Kelly is in a sweet spot. Since his final year at ANAM in 2013 he has created a comprehensive portfolio career for himself as pianist, teacher, broadcaster, producer, artistic director and even in the world of retail; in this final guise, he is founder and owner of South Melbourne’s House of Pianos (around the corner from ANAM on Park Street). In other words, he leads a multi-faceted musical life and finds it immensely rewarding. How did he take his first step on this journey?

“I loved music class in my primary school on the Gold Coast; in Grade 2, my teacher played the piano and on Friday afternoons he would get us all singing while he played. I remember sitting right underneath him to watch the piano playing. Likewise, when I was dragged to church, I would sit so I could see the organist and was fascinated by arms and legs flying in all directions.”

Although anyone who has worked with Stewart cannot imagine him playing anything other than a keyboard, he did flirt briefly with an instrument that was blown, not struck.

“Yes, I took up the trumpet near the end of Grade 4, because I wanted to play in the school band. The bandmaster only needed brass players at the time, and because I used to walk home from school, I thought I’d be buggered if I lugged a trombone. Playing in bands was fun but I never had any real love affair with the trumpet. Once I got to high school, I was fortunate to be in a fabulous music program. I was told anyone in the band had to also sing in choir and, as a stupid 13-year-old, I thought that singing in choirs was something only girls would do and that I would circumvent the system by asking to be the choir’s accompanist. That had the unfortunate effect of the school terminating their long-time casually employed accompanist, Marie Nicholson (not ABC Classic’s Mairi Nicolson!). She is a very fine musician with superb ears and couldn’t have been kinder, so much so that she would come to rehearsal and coach me on how to accompany choirs!

“Marie has been a great mentor and I still joke about how we became friends through me getting her fired. Actually, all the teachers I have worked with were important in different ways. My first teacher, Bill Murray, died earlier this year at 88 and was still teaching up until his final day. He gave me a great theoretical and technical grounding. Even at this stage – before I started Uni – I knew I much preferred playing with others to solo work.”

With the benefit of hindsight, Stewart realises that he did not give his all to his musical studies when he was a teenager.

“I was an extremely lazy student. In fact, an important early learning was failing miserably at an AMus attempt in my second-last year of high school. I had coasted on some natural ability all the way through my exams and got good if not spectacular results. I was warned but didn’t appreciate how much I had to do if I wanted to get to that next level. It was a great lesson.”

What a difference a few years can make – in effect the difference between a failed AMus and a successful audition for ANAM.

“I was doing my Masters at the Queensland Conservatorium and felt sure I wanted to go further; the main options were ANAM or going overseas. I had friends at ANAM who raved about it so tried my luck with 100% confidence that I stood no chance. Fate had it otherwise!”

What followed for Stewart was a literally life-changing experience. “Honestly, ANAM is the single most important thing to happen in my life so far. I had a transformative experience there and met an incredible network of contacts from within and beyond the music world. There were so many important teachers and guests, but overwhelmingly I’m grateful to Timothy Young, who was revelatory for me as a teacher. He has an ability to combine a deep, scientific understanding of physiology with a profound musicality and grasp of artistry in his teaching, like no one else I have met.

“I arrived at ANAM determined to become the best chamber musician and pianist that I could be. It was hard at Uni to find chamber music partners with the time and commitment to really pursue that sort of playing, so I was ecstatic to be in a place where that was literally a significant part of how one was supposed to spend the day!”

Stewart broke new ground at ANAM, becoming the first ANAM musician to benefit from the generosity of a group of donors who banded together as an ANAMsyndicate to support him through his studies. This is how he met ANAM’s Honorary Syndicate Convenor, the indefatigable Jan Grant.

“I was introduced to Jan in the office and she said: ‘Tell me about yourself’. I started by saying that I was from the Gold Coast, and she immediately interrupted saying ‘I LOATHE the Gold Coast!’ I quickly agreed to which she replied: ‘Well we shall be great friends then.’

“The support of my syndicate, and their interest in my career, was marvellous and many of them have become friends.”

Stewart now makes music around the country with performers of the calibre of Paul Dean, Sara Macliver, Wilma Smith and Gretta Bradman, and with fellow ANAM alumni including Laurence Matheson (piano 2016), Stefanie Farrands (viola 2008) and Phoebe Russell (double bass 2012). He is on the staff of the Melbourne Conservatorium at Melbourne University and the Victorian College of the Arts Secondary School (VCASS). As an artistic director, his Music by the Springs festival in Hepburn Springs has brought Australian musicians together for sold-out weekends of chamber music each February for the past three years. You can hear his playing regularly on the radio, and his voice as well, since he’s the host of Melbourne in Concert on 3MBS Fine Music Melbourne.

In other words, Stewart is rarely idle, which is just how he likes it.

“I’m most proud of my two ‘babies’ – Music by the Springs and House of Pianos. I love performing with friends and colleagues all around the country and have a number of long-term collaborators who, to my constant surprise, are still happy to work with me! And my position at VCASS gives me the immense privilege of working with the students there to shape and inspire their musical journey. It’s all extremely rewarding.”

I asked Stewart to think back to the day he first walked into ANAM, after so many formative musical adventures, and with an intensive period of study and performance ahead of him, a period which, in many ways, made him the musician he is today. What advice would he give to that younger version of himself?

“Never take for granted this time you are given to really practice and consolidate your technical and artistic mastery,” Stewart says. “Dream big and set ambitious goals.”