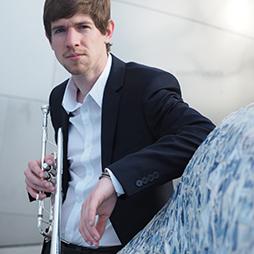 Now a member of the Auckland Philharmonia, Josh talks about how his time at ANAM helped him focus his musical priorities.

For trumpet player Josh Rogan, the choice of instrument was almost a foregone conclusion. Growing up in a family of brass players in Melbourne’s south east, the whole family played with the Frankston City Band. No surprises then that Josh started playing cornet as a small boy, progressed to trumpet in high school and is now composing as well as performing.

With his mum as his first teacher, Josh remembers being encouraged to practice the cornet for half an hour before going to primary school every day, but it was a labour of love that instilled good habits, even though he did not have what might be considered formal music lessons. Instead, he credits the various conductors and players in the Frankston City Band as the significant influencers who taught their young protégé everything they knew. He also believes the varied repertoire of the brass band provided the guiding hand behind his eventual move into classical music rather than jazz, so often the stronger attraction for a brass player. As for choosing music as his career, it seems likely that music chose him instead.

“As I grew up, I just always continued doing music, so I didn't really ever decide that it would be my career, I just loved it too much. I suppose by the time I was a teenager, I pretty much didn't see myself doing anything else.”

Embarking on his undergraduate degree after a young lifetime of playing with the brass band, Josh felt the need for more performance and parked his tertiary studies in favour of ANAM, largely due to “the amount of playing and performing that it offered, as well as the individual teachers.” After two years at South Melbourne, he says he “felt better about certain flaws in my playing”, although he insists he hadn’t completely overcome them, and decided to return to university and finish his degree. Auditions for post-graduate study overseas then followed and he landed a place at the prestigious Colburn School in Los Angeles.

Looking back at his ANAM experience, Josh cites two major influences on his career. The first is the strong appreciation for both chamber and contemporary music which has resulted in him “always finding chamber music ensembles,” despite his current role a Sub-Principal Trumpet with the Auckland Philharmonia in New Zealand. He also continues to work privately on contemporary solo trumpet music that “challenges my technique and musicality”.

The other is a passion for music education; ANAM sparked a desire to find “an education model that gives students what they need”. He found the structure at ANAM very different from, and in his case more successful than, other educational institutions, because it provided exactly what he needed to improve his playing and he would “love to see the same effect in other institutions”. While there’s nothing yet in the pipeline, Josh’s idea for a model that can be applied more universally is bubbling away in the background.

The challenges facing young musicians are many and varied, but for Josh the enduring one was finding reliable practice space that he felt comfortable enough to use every day. Until he left ANAM, he had always been at an institution with good practice facilities, but then found he had to practice at home (in an apartment), in public parks, or before and after rehearsals in whatever venue he found himself.  While he knows this may seem a trivial point to non-musicians, the need to feel enthusiastic about practice is vital as it can be “difficult to improve by the amount needed to reach a professional quality standard, rather than just being ‘good’.”

Some of the other challenges he juggles verge on the existential, such as “where in the world I want to live, what else I want from life to maintain balance, how can I continue to progress and avoid ‘stagnation’, and how can I find musical situations that excite me as much as when I was younger and playing in multiple ensembles with a wide variety of repertoire and styles.”

In the few years since leaving ANAM, Josh has already experienced some career highlights that will be hard to top, the greatest so far being a last-minute gig with the New York Philharmonic brass during their visit to the Colburn School in Los Angeles where he was studying.

“One of their trumpeters was sick and couldn't make it [so] I got to step into their showcase brass quintet and perform as part of their ensemble. They were all very welcoming and encouraging, and I felt extremely privileged.”

Fortunately, low points have been less frequent, although he does own up to missing a church recital requiring eight trumpets and an organ. While the Saturday rehearsal went well, only seven trumpeters performed on the Sunday, as Josh managed to sleep through multiple alarms; after profuse apologies to all concerned, he is now meticulous about putting the alarm clock on the opposite side of the room.

Asked to give advice to his 20-year-old self, Josh would say that there's no finish line. “Just keep putting yourself in the best situation you can, working as hard as you can (in a reasonable way), and you will end up doing what you want and finding challenges.” He believes this is much better than simply aiming for “some big goal" that needs to be achieved by a certain age, and it leaves you open to finding that maybe what you think you want isn't always going to be the case.

He would urge the current crop of ANAM students to continue to put themselves in the highest quality musical situations they can. “They are already amazing, but there is no reason they need to judge themselves according to peers. They should aim to match their idols, because if they do, then they will be able to reach that even higher goal eventually!” Josh also believes that the way to "win a job" is not to avoid making mistakes. “As long as they have done due diligence in the practice room, played the material in at least five different situations, and worked with at least one teacher on it, I believe that anyone at ANAM could win a job by only trying to WIN the audition, not by avoiding being knocked out.” Sage advice indeed.

For Josh, the best thing about being a professional musician is the enjoyment he derives from playing with other professionals. His immediate future lies with the Auckland Philharmonia, which he describes as a wonderful orchestra, and his section in particular as being “a true joy to work with”. He feels it’s the ideal place for him right now, and one where he can continue to develop his own playing. This is partly due to the available free time and access to practice facilities, but also because “we play great music, and I have a good overall lifestyle”.

As for non-musical goals, Josh says that each year he likes to reassess if he’s satisfied with doing what he is doing.

“For now, I am finding enough pleasures and challenges in my current situation that it's not yet time to change. My long-term future could be anywhere, doing anything... but I'll probably still be playing trumpet all of the way!”

The top brass at Frankston City Band must be very proud indeed.

This is an almost impossible question to answer, but... right at this moment, Scriabin's The Poem of Ecstasy is a particular gem for me, and I'm very glad I discovered Peteris Vasks' Cor Anglais Concerto (however, if you ask me in an hour, I'll almost certainly think something quite different).