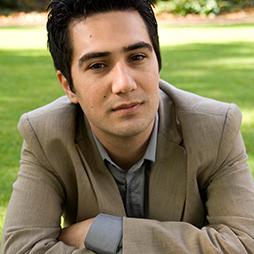 Pianist Amir Farid concluded his ANAM studies in 2005. His latest musical adventures have taken him to New York, as Jennifer Gilchrist discovers.

Ask a 30-something to nominate their favourite childhood movie and the likely contenders might be Toy Story, Back to the Future or Home Alone. Amir Farid is no exception to the rule, but a little more investigation reveals an altogether different genre that sparked his young imagination. More on that later, but as with every good movie script, the scene must be set before the story continues.

Prior to the revolution of 1979, Amir’s father Manouchehr had been a celebrated stage and film actor in his homeland of Iran; however the dramatic arts did not fit with the new regime, so he moved to California. Amir was born soon after and in 1985, the family emigrated to Australia, settling into a vibrant Persian community in Melbourne.

The arts were part of everyday life in the Farid family, and Amir and his sister were encouraged to take up an artistic pursuit from a young age. At six years old, he began piano lessons and knew even then that he’d found his instrument. Growing up in a household where “music was always playing” he says it’s no wonder his parents’ interest in classical music rubbed off onto him, but it wasn’t just sound recordings that provided inspiration. The movies he remembers so clearly from his childhood are “classic old films about musicians and composers” including A Song to Remember (about Chopin), Song Without End (about Liszt) and Song of Love (about Schumann). Amir jokes that he “can’t help but to see a theme here” but early influences are often profound, and it’s clear that this was no passing fad.

Having parents who “supported me enormously from day one” it soon became clear that Amir’s passion for music was strong enough for him to consider it as a career. But while encouragement is important, having the right teacher is vital and Amir was fortunate to have some of the best. First was Laura Vivarini, who was then working at a branch of Bernie’s Music Land, the scene of his early lessons in suburban Melbourne. “She was a teenager at the time, and was my main teacher for nine years… she instilled in me a desire to explore as much repertoire as I was bold and keen enough to tackle, and gave me the belief that I could fulfil my dream to become a concert pianist". Renowned teacher Ronald Farren-Price and his wife Margaret then “took me on to help me develop to the next level” with obvious success; and Amir considers “RFP” to be his main guru and guide as a pianist, providing the main source of inspiration throughout his teenage years.

Although he had always aspired to becoming a professional musician, other options such as IT and aviation came under consideration, but the decision “to commit the rest of my life to music” was made as Amir was approaching the end of high school. In the end, it was an easy choice to make as music had always been “such a strong presence in my life, I couldn’t imagine any other way".

After graduating from the Melbourne Conservatorium of Music, the next step was ANAM. Growing up in Melbourne with the most elite music training institution on his doorstep made it an obvious choice, and he says that decision ultimately became “one of the most substantial turning points in my musical life". As well as giving him the opportunity to have “a first-hand taste of life as a working musician” by regularly performing for the public and constantly learning new and exciting repertoire, it also afforded him the opportunity to collaborate with other musicians, and to be tutored by “some of the biggest names in the music world”. In addition to allowing “a test drive of a music career”, it also reinforced his desire to devote his life to music.

Another aspect of Amir’s time at ANAM was the chance to explore chamber music with a depth he had not previously experienced, an experience that he says has “shaped my career and artistry into the pianist that I currently am”. Since then he has also explored vocal and operatic repertoire through various channels, ultimately leading to his current appointment as a staff pianist in the vocal department of New York’s prestigious Juilliard School.

“If my aspiration upon entering ANAM was to be a concert piano soloist, it is now to be an artist.”

On the subject of challenges for young musicians, Amir has quite a list, with “finding my own feet” as number one after leaving the safety of South Melbourne. Even though ANAM provides all its departing musicians with “a formidable toolbox and skill set” to further their careers, he says the outside world can be a daunting place for any musician who encounters it on their own for the first time.

As to highs and lows, the first big high in Amir’s career came shortly after leaving ANAM, when he won first prize at the 2006 Australian National Piano Award. So his belief that he really did “have what it takes to pursue the dream of being a full-time musician” was reinforced, but a low point was soon to follow when he embarked on his first long-term overseas adventure.

While his studies at London’s Royal College of Music were “amazing… I was able to take my musicianship and artistry to new levels” he found living in London on his own, away from home for the first time in his life, to be difficult. He admits that “living in this amazing city and remembering it as a struggle” was also a necessary step in his development both musically and personally. Now a resident of New York, Amir says his London experience played a huge part in preparing him for his second bout overseas “and for life overall”. However, he is also quick to credit the “endless support and belief that my wife Annabelle has in me” for making his foray into one of the world’s most competitive environments not only possible, but successful.

Career highlights are already numerous, with playing Carnegie Hall, the Lincoln Center’s Mostly Mozart Festival, a major opera project with the New York Philharmonic under conductor Jaap van Zweden, and his position at the Juilliard School chief among them. Add to that a growing reputation as a sought-after musician in one of the toughest markets on the planet, and it’s easy to see why the last three years have provided Amir with the “biggest high, and the most satisfying phase” of his career so far.

As charmed as his career appears to a casual observer, Amir says there are enduring challenges to overcome as a professional musician, the most fundamental of which is “maintaining belief in your abilities”. Citing criticism “both from one’s self and from others” as the chief culprit, he says that one or the other (and sometimes both) are “always there and ready to opportunistically stomp on you at a moment’s notice”. Allowing such criticism to remain unchecked can be dangerous he says, and dealing with it is one of the major challenges of an artistic career.

“Ultimately one needs to learn to filter the outside criticism, and limit your own criticism to things that are constructive.”

With the benefit of hindsight, Amir would tell his 20-year-old self that certain things only get harder as you get older, and to “make the most of your potential”.  He offers the same advice to the current crop of ANAM students, urging them to “seize the amazing opportunity that ANAM has given you all”, adding that getting paid to practice and obtaining the level of training ANAM has to offer is “one of the most valuable opportunities you will ever experience in your musical lives”.

With the last three years having been devoted to establishing his career and reputation in the Big Apple, Amir says he is “delighted” with the start he has made and is pushing himself to achieve even greater things and fulfil his ambitions. If one of those ambitions is to make a film about the life of a concert pianist, he’s not telling...

Favourite piece of music: Impossible to choose! …This is a question I often ask myself out of curiosity, and I disappoint myself by failing to come up with an answer. There is so much music out there that I simply cannot narrow it down to one or two pieces that I can’t live without. Every day I feel different, think differently, experience different things, and therefore react differently to various styles of music.