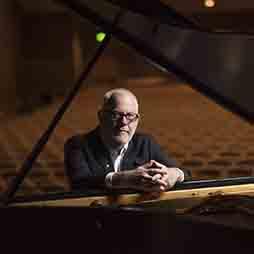 Performed at the ANAM Set Festival by
Kate Worley (viola)

Program note:
Helix Variation is based on a piece I wrote several years ago simply called Helix, a vehicle for jazz musicians, inspired by certain music of the great US saxophonist/composer Wayne Shorter. The ‘score’ for Helix exists as a lead sheet ie the melody and chord symbols which express the structure and generate the substance of any performance. The harmonic structure of Helix has generated virtually all of the pitch material of Helix Variation, which is in effect an extended iteration/improvisation of the 42 bars of slow ¾ pulse that comprise the earlier piece.

The intention with Helix Variation is to bring the improvisatory and ‘composed’ propositions into a unity. The main focus here, of course, is the viola, its character and expressive range. Helix Variation is in several sections, which explore various ‘voices’ unleashed by the player: dark, mysterious rubato arioso; energetic, rhythmic moto perpetuo with tricky string crossing; rhetorical flights undermined by ironic responses; finally a brief statement of the last few bars of Helix, before the piece leaves the ground ‘gradually disappearing into a cloud of harmonics’.

About the composer:
It is difficult to describe Paul Grabowsky's career easily. He has been a director of some of Australia's most prominent arts festivals, the composer of nearly thirty feature film scores, and several works of music theatre, the founder and leader for nineteen years of the Australian Art Orchestra, an executive at the ABC, and is currently at Monash University, where he heads up the Academy of Performing Arts. Whether as composer, teacher, television personality, mentor or advocate for the role of artistic expression as a defining attribute of contemporary life, for him this is all informed by his work as a pianist, and composer, particularly in the field of jazz, where, according to him, 'the piano never lies'.

His musical journeys have resulted in collaborations with musicians from many countries, not least with the First Nations peoples of Australia, and those journeys continue. Among his many awards are seven ARIA Awards, the Melbourne Prize for Music and an H.C. Coombs Fellowship. In recognition of his achievements he was made an Officer of the Order of Australia in 2014.