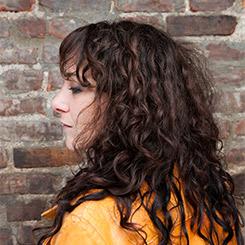 Noemi Liba Friedman's approach to composition is linguistic, textural, emotionally dynamic, multi-faceted and often multi-media. She creates original, specifically-built musical palettes for each of her works, interrogating what is silent, what lies beneath the surface and what is overwhelmingly present. Noemi wears many artistic hats, or rather a single multi-faceted one; a composer, arranger, creator of electronic music, electro-acoustic sound and visual designer, painter, jazz trained vocal performer, music producer and educator. Her music crosses mediums and cultures, genres and musics of the world.

Noemi’s works have premiered at the Klangwerkstatt Festival für Neue Music in Berlin, the Camino Contro Corrente New Music Festival in Northern Italy, at the Brooklyn Art Museum, the United Nations in New York, the Kennedy Center In Washington DC, the Lewis Arts Complex at Princeton University and the Bendigo International Festival of Exploratory Music. As a solo vocalist, she has performed with John Zorn's Mycale, collaborated/performed with Biennale Artist Heri Dono, and with Nimrod Weiss of Eness. She has recorded 2 original vocal recordings, Freefalland See, Saw, with musicians based in Melbourne, Chicago and New York and has toured in Australia and overseas.

Noemi is currently completing her Masters at the Melbourne Conservatorium of Music. She has received the Florence Bradford Scholarship for excellence, the Ernst Morawetz Prize for Ethnomusicology and Musicology, the Catherine Mary Sullivan Scholarship in Music and the Cassidy Bequest Scholarship, as well as two consecutive awards for excellence, all for Composition.

FInd out more at noemiliba.com