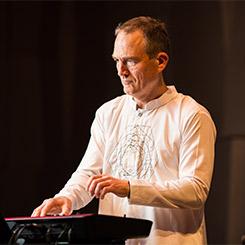 The Death Cap Mushroom is a deadly poisonous mushroom often mistaken for ordinary funghi (pron. Fun Guy). It has taken out at least one Roman Emperor and one Holy Roman Emperor. It won't go away, and it seems to be spreading, even to Australia, where it is concentrated near Parliament House, Canberra. On the surface it seems quite a reasonable mushroom but once it gets inside a human death follows swiftly. Though looking the same as other mushrooms it regards itself as superior and chosen. It holds gatherings in national parks where it glories in its white European roots. It is closely associated with the orange fat-headed American poisonous mushroom, Fly Agaric, that returns every four years. The prime sequence to 17 is used throughout the piece (17 is a product of primes 2,3,5,7). Prime = supremacy. Toy piano = white privilege. The work’s text is by Dr Arjun von Caemmerer.

About the composer:
Australian pianist and composer Michael Kieran Harvey was born in Sydney and studied piano with Alan Jenkins, ANU School of Music; Gordon Watson, Sydney Conservatorium; and Sándor Falvai, Franz Liszt Academy, Budapest. His 40-year international career has been notable for its diversity and wide repertoire. He has especially promoted the works of Australian and contemporary composers (premiering well over 300) and recorded over 50 solo CDs.

Harvey holds a PhD in music composition. His compositions have been performed in Europe, the UK, North and South America and Asia, in addition to major Australian festivals. His homage to Zappa, 48 Fugues For Frank, received the AMC/APRA Tasmanian State Award for the Instrumental Work of the Year (2011). His ensemble work Patañjali received an AMC/APRA Tasmanian State Award for Instrumental Work of the Year (2016).

Dr Harvey is on the guest faculty of Australian National Academy of Music, is Adjunct Senior Lecturer at University of Tasmania and is a Fellow of the Australian Academy of the Humanities.