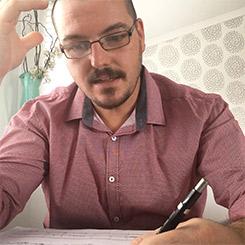 Performed at the ANAM Set Festival by
Alexandra King (oboe)

Program note:
This Teetering Bulb was born out of the inspiration drawn directly from the poem, ‘The Floor’ by Russell Edson. The form of the composition mirrors the poems’ three stanzas, with a holistic emphasis motivated by the last statement: “this teetering bulb of dread and dream”. The sole basis of the piece exhibits an interplay between the polar opposites, ‘dread’ and ‘dream’. This work for solo oboe is an attempt at musically capturing an all too familiar desire to fulfil a personal passion but which is often shrouded in anxious self-doubt, especially felt during these trying and uncharted times for artists, musicians and creatives alike.

The floor is something we must fight against. Whilst seemingly mere platform for the human stance, it is that place that men fall to. I am not dizzy. I stand as a tower, a lighthouse; the pale ray of my sentiency flowing from my face.

Dear horizontal place, I do not wish to be a rug. Do not pull at the difficult head, this teetering bulb of dread and dream.

About the composer:
Mark Wolf’s music is motivated by extra-musical processes of invention. His current practice is focused on the parallels found between architectural space and musical time. His spatio-temporal renderings are steadily reaching wider audiences with recent performances in Europe, North and South America and Australia.