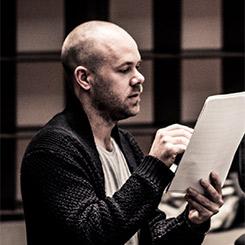 Luke Altmann co-founded weekly new music broadcasts at Radio Adelaide in 2000, with a special emphasis on the work of South Australian composers, which he continued to produce and present until 2012. He currently presents Night Music weekly on ABC Classic.

In 2005 he transformed Adelaide's inner-city art studio De la Catessen into an experimental music venue and presented over 200 new music events in four years, featuring performances by composers and musicians from around the world. In March 2021 he relaunched De la Catessen as a record label, pressing LPs of music by artists who performed there.

Altmann's reputation as a composer rests on two decades of regular appearances on Adelaide's chamber music concert programs. A member of new music organisation The Firm since 2005, his works have also been presented by Musica Viva, COMA, and ABC Classic. Portrait albums of his solo piano music and chamber music have been recorded by Konstantin Shamray and Benaud Trio.

In recent years he has emerged as a composer for the cinema, with APRA and AACTA nominations to his credit. His original scores include The Leunig Fragments (2019) and Fell (Sydney Film Prize nominee, 2014).

He lives in Port Adelaide with his partner and their two sons.

Find out more at lukealtmann.bandcamp.com/merch