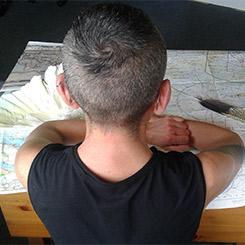 [sound is] A Body in Space
for percussion
Composed for Alison Fane
First performance: 14 May 2022

Performed at the ANAM Set Festival by
Alison Fane (percussion)

About the composer:
K. Travers Eira usually works with small ensembles, ideally in a workshop context, and/or by notation systems which encourage a level of performer-determination of the music. This comes from a collaborative philosophy of practice which places high value on the performer's in-depth knowledge of their instrument and their own unique ways of developing a score into a performance. Travers' work explores boundaries and their dissolution, slow incremental change, and the edges of sound production. They are interested in contexts and histories that may go unnoticed. Travers' work has been selected for performance across the eastern states of Australia and overseas, including by Elision, Ensemble Françaix and A very small consortium. They are currently developing a major production for La Mama Musica, involving paper maps as metaphor and instrument, mobile performers, participatory audience and an installation artist. Travers is particularly attracted to percussion – for its timbral qualities, and its vast potential for semiotic reference. Their output includes works for timpani (plus Tower of Hanoi) and for tower bells, and a recent commission for Alison Fane (ANAM). Travers has performed with Speak Percussion as 'extra' in several projects, and plays in two gamelan ensembles. Travers holds a B.Mus with honours in medieval musicology (submajor piano), a Grad. Dip. in composition and a PhD in linguistics. They have also worked briefly under the mentorship of Liza Lim and Ros Bandt. Travers spent 20 years working with Aboriginal people reviving their languages, and is now site manager of a food bank.