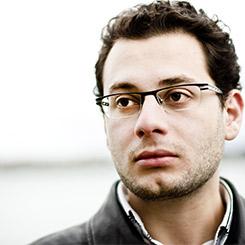 Program note:
Gabriel Fauré’s late song Eau Vivante from La chanson d'Ève is a miracle of unstable continuity. A single, constantly refreshed line weaves through the piano with an unbroken surface of delicate harmony. Quite audacious invention floats just beneath the surface of this perfected vision of spring water in the Garden of Eden. My piece is an attempt to analyse, synthesise and dip into this spring of harmony, yet is in a process of constant failure. I find it fascinating when a musical series of events that achieves a harmonious result in Fauré can be run aground; taken to extremes and led into impossible dead-ends. I have tried, a whole century later, to reconstruct the rarefied atmosphere conjured by the isolated, near-deaf Fauré at the turn of the 20th century. Can we really dream of an untrammelled natural world in 2021?

About the composer:
Jack Symonds is a composer, conductor and accompanist, and Artistic Director of Sydney Chamber Opera. He studied composition at the Royal College of Music, London under Kenneth Hesketh and at the Sydney Conservatorium of Music where he received the University Medal. Trained also as a pianist and trombonist, he continues to work regularly as an accompanist and pianist, giving the premiere of many new works as well as frequently conducting his own and others’ music, including Britten’s The Rape of Lucretia, Owen Wingrave and The Turn of the Screw, Dusapin’s Passion and O Mensch!, Romitelli’s An Index of Metals with Ensemble Offspring, Benjamin’s Into the Little Hill, Kurtág’s... pas à pas-nulle part..., Saariaho’s La Passion de Simone, Maxwell Davies’s The Lighthouse, Kancheli’s Exil, and Janacek’s The Cunning Little Vixen (for Victorian Opera and SCO). He has also conducted the world premieres of Gyger’s Fly Away Peter and Oscar and Lucinda, Finsterer’s Biographica, Ricketson’s The Howling Girls and Smetanin’s Mayakovsky.Significant composition premieres include Climbing Toward Midnight, an opera re-imagining the second act of Wagner’s Parsifal, a piece for New York’s JACK Quartet, the John Bishop commission for the 2021 Adelaide Festival, the Dostoevsky opera Notes from Underground (2011, restaged at Carriageworks in 2016), pieces for Australian Chamber Orchestra, the Composers Ensemble at Dartington where he studied with Detlev Glanert, cello works for Timo-Veikko Valve and Patrick Murphy, Jane Sheldon, four works for Australia Piano Quartet, the Streeton Trio, a viola d’amore and percussion double concerto for BIFEM and a 2015 concert series curated around his music by Affinity Collective which included three premieres. His debut CD ‘Cycle and Song’ was released on Hospital Hill in 2016.