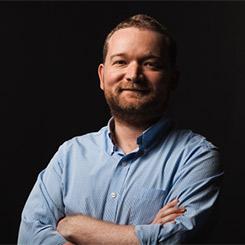 An Architecture of Butter and Sugar
for flute
Composed for Lilly Yang
First performance: 8 Dec 2021

Performed at the ANAM Set Festival by
Lilly Yang (flute)

The fine arts are five in number:
Painting, sculpture, poetry, music, and architecture, of which the principal branch is patisserie.

About the composer:
Ian Whitney is a Sydney based composer, originally from Brisbane who is interested in fictional musical narratives. He is 2020-2021 Layton Emerging Composer Fellow. His work has been performed by the Tasmanian Symphony Orchestra, Victorian Opera, PLEXUS, Arcadia Winds, Highly Strung and Ensemble Françaix. Additionally, he has written significant solo works for violist Christopher Cartlidge and harpist Alice Giles AM. He is currently undertaking candidacy for a Doctor of Musical Arts at the Sydney Conservatorium of Music, under the lead supervision of Carl Vine AO. Previously, he studied at the Queensland Conservatorium with Gerard Brophy and Stephen Leek and whilst a student was awarded the inaugural Australian Youth Orchestra/National Institute of Dramatic Art Fellowship for theatre music. He was also twice selected for the Symphony Australia/Tasmanian Symphony Orchestra Composers’ School, and was also selected for the Victorian Opera Composer Development Program. Before returning to further study, Ian worked as a cultural bureaucrat at the Embassy of Australia, Washington DC and the Australia Council for the Arts.