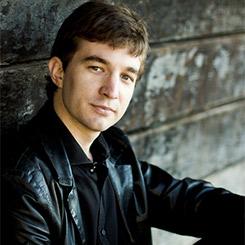 Performed at the ANAM Set Festival by
Felix Pascoe (violin)

Program note:
Shadow Partita 1004 responds to Bach’s matchless Partita No. 2 in D minor (BWV 1004) for violin. Each of this work’s four short movements forms a ‘shadow’ to each of the first of Bach’s first four movements. The resemblance of the ‘echo’ to Bach’s original voice varies greatly: in some instances the Shadow Partita obsesses over mere fragments as might a determined player at their practice. This work may be performed as a standalone piece, or interleaved with Bach: each corresponding movement immediately following each of Bach’s, before ending with Bach’s Chaconne: it has no ‘shadow’ movement here - since it is perfect and unanswerable.

i. Allemande - Our player obsesses, practices.
ii. Courante - Gestures come to us from a distance, the muted player might be on a different mountaintop.
iii. Sarabanda (subtitled Plato’s Cave) - The player has split personalities who cannot agree upon a reality: echoes keep returning to try and start again.
iv. Giga - A tiny descending chromatic figure is compressed and fetishised.

About the composer:
Huw Belling is a composer and conductor, and the Principal Artistic Associate of Sydney Chamber Opera. He holds a doctorate from the University of Oxford, and also studied at the Royal College of Music in London, and the Sydney Conservatorium. Huw’s works are performed and toured internationally, including commissions in the repertoire at Westminster Abbey, and the Gramophone Award winning Ensemble Plus Ultra. Huw has conducted premieres with Sydney Chamber Opera and continues to produce new and established works with colleague Jack Symonds. Recent commissions include the chamber opera Fumeblind Oracle, part of the Future Remains diptych for the 2021 Sydney Festival; Inside Mr Enderby chamber work for the Manchester Collective; and Victory over the Sun, a chamber opera for the 2016 Sydney Biennale. Huw has written in Australia for ensembles such as the Grainger Quartet, Ensemble Offspring, the Australia Piano Quartet, and the Sydney Bach Society.