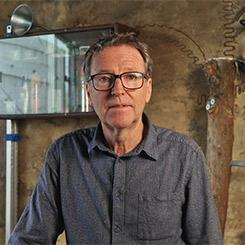 THIS is IT
for percussion
Composed for Alexander Meagher
First performance: 2 Dec 2021

Performed at the ANAM Set Festival by
Alexander Meagher (percussion)

Program note:
THIS is IT places the instruments just out of reach of the performer, necessitating travel between three stage positions. The player drums rhythmic heel-toe patterns on the floor while simultaneously playing a range of instruments and speaking a text.

The work is written for and in collaboration with Alexander Meagher. As well as being a fine musician, Alexander is an accomplished karate devotee and has a deep appreciation for a wide variety of choreographed dance. He cites genres such as Riverdance, disco, breakdance, ballet and gymnastics as influences. Alexander famously performed the dance routine from the cult film Napoleon Dynamite for an in-house ‘Fridays at 3’ class in 2020 (which he had first taught himself in 2013 while still at high school). Videos of Alexander performing both kata, set-piece karate routines, and his Nap Dom tribute very much informed the composition process. The heel-toe feet rhythms originate in work done by the stomping, string-can-wielding Graeme Leak String Quartet in the nineties. It is a pleasure to work with Alexander who has made a significant contributions to all aspects of the work, most notably in his realisation of the choreography.

I am grateful to be one of the sixty-seven composers selected for this ANAM Set commission program. It is a fantastic initiative that will generate a significant body of new Australian concert pieces and enrich our cultural landscape.

About the composer:
Graeme Leak studied piano and percussion in Sydney, New York and Melbourne. He works as a composer, music director, collaborator and instrument maker with both professional musicians and community performers in Australia and internationally. Career highlights include tours with The Spaghetti Western Orchestra to Montreal Jazz Festival and the Royal Albert Hall; premiering over 100 solo and ensemble works with contemporary music groups Flederman and Synergy; and playing for Olivier Messiaen at the Sydney Opera House in 1988. Graeme has written over 50 works for instruments and voices, including commissions for the 2006 Commonwealth Games and the 2013 Canberra Centenary. Recent works include Spirit Rising (2018) for string-can orchestra with multiple community groups as guest performers, and The Exquisite Now (2019) for groups of any number for Museums Victoria. Graeme is also in demand as a director and music leader. He devises productions that involve a mix of composing, instrument making, collaborating and workshopping with groups of all ages, skill levels and from all walks of life. Events include ‘Raising the Roof’ (2012) with 300 diverse participants for Arts Centre Melbourne and an ongoing collaboration since 2017 with the small town of Girgarre, Victoria, creating a tin-can orchestra known as ‘Girgarre Junkestra’. Graeme has devised and produced one-off special events in Australia for Melbourne Recital Centre, the Melbourne Festival, Ten Days on the Island Tasmania, the Queensland Music Festival and in the UK for the Watford Colosseum, Cornerstone Arts Centre and East Neuk Festival.