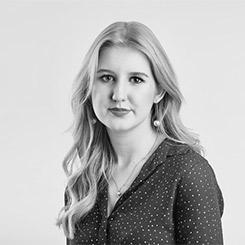 Emma Greenhill, born 1995 is a Sydney based composer, arranger and violinist. She completed a Bachelor of Music (composition) at the Sydney Conservatorium of Music in 2017 where she studied under Paul Stanhope. In 2017, Emma won the watermark composition prize, where her composition Paper Boats was played by all four finalists in the Kendall national violin competition. In 2014 Emma won the Verge Awards 'best composition' prize and in 2012 was the recipient of the James Eastern Memorial Prize. Emma’s experience as a music teacher has inspired her to write more pedagogical pieces in a solo and ensemble setting. One of her compositions for beginner violin will be included in the new AMEB violin series 10, due for release later this year. In January of 2020 Emma became a represented pedagogical artist through the Australian Music Centre, in April of 2020 Emmawas commissioned by Trinity Grammar School to write a piece for their junior school choir and string ensemble and later that year, Emma was commissioned by Karen Carey to write a piece for the ‘Symphony For Life' foundation – an orchestra set up to target children in disadvantaged communities. In November of 2020, Emma was commissioned by James Blackford to write a new piece for a project seeking to expand the repertoire for trumpet and euphonium, funded by Create NSW. This piece, Insomnis, is currently being recorded and will be due for release this year. Emma regularly arranges music for local artists and events, composes music for Sydney-based chamber groups and for advertisements and indie films.