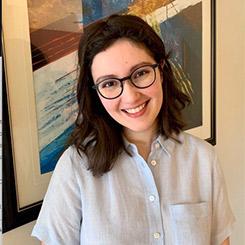 Fantasia No. 7
for double bass
Composed for Ken Harris
First performance: 14 May 2022

Program note:
This double bass solo is titled Fantasia due to the nature of its free and improvisatory construction. The manipulation of small musical cells and their sudden juxtapositions form the modus operandi of this work.

About the composer:
Elizabeth Younan (1994) is an Australian composer of Lebanese descent from Sydney. She was a featured Australian composer of Musica Viva’s 2018 International Concert Season, where her Piano Sonata was premiered by Van Cliburn silver medalist Joyce Yang. The work was subsequently nominated for “Instrumental Work of the Year” at the 2019 Art Music Awards. Accolades include the Jean Bogan Youth Prize for her Five Persian Preludes (2014), the 102.5 Fine Music and Willoughby Symphony Young Composer Award for her Clarinet Concerto (2016), the Watermark Prize as part of the Australian National Kendall Violin Competition for her Microsonata No. II for Violin and Piano (2020) and two Willgoss Prize Commissions, in association with UNSW and USYD (2020). Elizabeth is one of the composers taking part in the Sydney Symphony Orchestra’s 50 Fanfares Project, and her work has been performed and broadcast in Australia, Italy, South Korea, the U.K., and the U.S. Elizabeth holds a Bachelor of Music in Composition with First Class Honours (2015) and a Master of Music (2018) from The Sydney Conservatorium of Music where she studied with composer Carl Vine AO as a recipient of the prestigious Australian Postgraduate Award. Elizabeth is in her final year as an Artist Diploma student under full scholarship at the Curtis Institute of Music, where she holds the Jimmy Brent Fellowship. She studies with Dr. Jennifer Higdon, Dr. David Ludwig and Dr. Richard Danielpour as the second Australian composer in history to be admitted to Curtis.