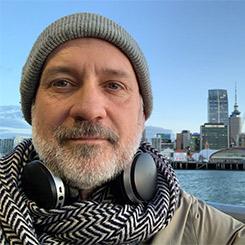 Performed at the ANAM Set Festival by
Jack Cremer (bassoon)

Program note:
Temporal Sweetness Profile is a study caught between three exploratory parameters: highs and lows, of softs and louds, and fast and slow vibrations. The work’s sole purpose is a continual attempt to bridge two different worlds of register and dynamic, and oscillation.

About the composer:
David Chisholm is internationally recognised as a composer defined by diverse collaborative capacity and a curator and producer of vision and courage. He has won an APRA|AMCOS Art Music award, six Green Room Awards, a French Australian Chamber of Commerce and Industry Award, a Highly Commended Paul Lowin Prize, a Mention at 36th Bourges International Competition of Electroacoustic Music and Electronic Art, and a Special Mention in the X Media Forum, the 31st International Film Festival in Moscow, the Medibank Private State and National Arts Awards, and the National Young Achiever of the Year. David was composer-in-residence for BalletLab and an Associate Artist for Malthouse Theatre before becoming the Founding Artistic Director of the Bendigo International Festival of Exploratory Music and its roster collective Argonaut. David has undertaken artist residencies at HIAP in Helsinki, EMPAC in New York, Centre Intermondes in La Rochelle and Camargo Foundation in Cassis. He was the first Australian-born composer to be a featured guest of the Encuentro Internacional de Compositores in Santiago, Chile. An inaugural recipient of the Victorian Government’s Creator Grants, David holds a PhD from University of Melbourne. Appointed in 2019 as Senior Lecturer and Composition Convenor to Te whare o ngā pūkōrero pūoro | School of Music at The University of Auckland | Te Whare Wānanga o Tāmaki Makaurau, he was promoted to Head of School in early 2021. David is published by Babel Scores, Paris.