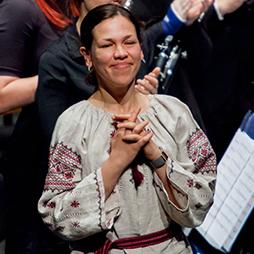 Performed at the ANAM Set Festival by
Charlotte Miles (cello)

Program note:
In early 2021, I was selected by the Australian National Academy of Music as one of the composers for their incredible ANAM Set project, which saw 67 Australian composers being commissioned simultaneously to write pieces for each of ANAM’s 67 musicians. I wanted to use this special opportunity to write for cello and was lucky to be paired with Charlotte Miles - the youngest soloist I got to work with in the past decade, yet an absolute force of nature. Writing for cello within the chamber music setting can be tricky: cello can be easily overpowered by most instruments, especially in its middle register. However, with a solo piece, I had the privilege to be able to throw these considerations into the wind and let my creativity and imagination drive the composing process. It helped that Charlotte encouraged me by saying I could write anything I wanted to and she would make it happen! There is a certain element of theatrics and drama associated with cello, and I wanted to exploit it. I also happen to be fascinated by how cello can take on a different personality in every register, so I wanted to exploit that as well. This is how the idea of the cello representing an entire string quartet came to mind. The two contrasting sections in the middle of the piece – the playful tango and the serene lyrical section – represent imaginary dialogues between cello and viola and cello and violin, respectively. Overall, my idea for this project was to add a fresh, daring and conceptually new piece to the cello recital repertoire. String Quartet No. 1 for solo cello is a virtuosic, quirky, fun, lyrical and dramatic conversation all within one instrument.

About the composer:
Catherine Likhuta is an Australian-based composer whose music exhibits high emotional charge, programmatic nature and rhythmic complexity. Her works have been played throughout the world by prominent orchestras (such as Melbourne Symphony Orchestra and the University of Georgia Hodgson Wind Ensemble), chamber groups (such as Atlantic Brass Quintet, U.S. Army Field Band Horns, Ensemble Q and Western Brass Quintet) and soloists (including Peter Luff, Paul Dean, Michael Duke, Andrew Pelletier, Denise Tryon and Adam Unsworth). Her pieces have been played at Carnegie Hall (Stern Auditorium/Perelman Stage), Glyndebourne Opera House (Organ Room), five International Horn Symposiums, two World Saxophone Congresses, the Midwest Clinic and many other festivals and conferences. She was the winner of the 2014 and 2020 International Horn Society Composition Contest (virtuoso division) and the 4MBS Kawai Composition Contest, as well as the recipient of several awards, including two grants from the Australia Council for the Arts.

Catherine holds a Bachelor's degree in jazz piano from Kyiv Glière Music College, a five-year degree in composition from Kyiv Conservatory and a PhD in composition from the University of Queensland. She is an active performer, often playing her own music. She was the soloist on the premiere and the CD recording of Out Loud, her piano concerto commissioned by the Cornell University Wind Ensemble, and the pianist on Adam Unsworth’s CD Snapshots. Her music can be heard on Albany, Cala, Equilibrium and Summit Records.