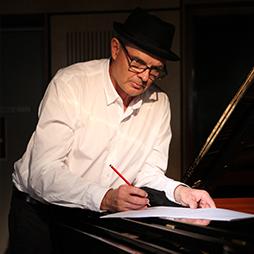 Performed at the ANAM Set Festival by
Kane Chang (piano)

Program note:
The music for Fragility and Sonorousness was developed in a conversational way with Melbourne-based pianist Kane Chang to capture the fragility of experience with the richness of sonorous piano textures. It is both pure sound—lingering moment and explosive virtuosic piano textures—and philosophical, drawing on contemporary Chinese architects Rossana Hu and Lyndon Neri’s ideas of memory and surprise. Hu and Neri’s concepts of revealed raw memory of place and the sudden intimacy of a Shanghai nong tong alley “full of discovery and surprise” (Hu and Neri 2017) governed the structure of the piece. The music works as a triptych: the middle inner space is a distilled and disrupted interior sonic room with hints of Hu and Neri’s glass framed bath at the centre of a room; whilst the outer sections sit astride the ‘inner room’ moving in arching forms from nothingness to massive movement and back again, perhaps with hints of the architects revealed raw red brick of memory. The musical content came from our discussion; to resonate with Kane’s love of Bach spirituality, Chopin’s longing and ancient Chinese guzheng virtuosity, the music veers from lingering tones to massive sonority conglomerations through juxtapositions of inspirations from ancient Japanese Gagaku spectral chords, Korean Gugak kyemyŏnjo modal lyricism, the New York free-jazz of Matthew Shipp, and Chinese traditional guzheng-like virtuosity, but with hints of European baroque and the romantic lyricism of Bach and Chopin. The structure of the triptych is organic in its flow: its inner central room of slowness explores Gagaku-like spectral colours disrupted by New York-influenced free-jazz and cheeky hints of Afro-Cuban salsa son clave, whilst the outer flanks’ journey fro, nothingness to movement have elements of surprising hints of son clave appear at the close, and the opening’s lingering kyemyŏnjo-inspired melodic fragments push into the distilled inner room. In pure music terms its triptych of fragility and sonorousness falls into the organicism of the following form: A (a, b, a’, b’’, a); B (c, [b’’], d, c’): A (b a [c/d]).

About the composer:
Bruce Crossman is an Australian composer with a focus on Asian-Pacific musical identity. The aim of his creativity is to generate spiritual presence through stillness with colour-energy that speaks of the Asia-Pacific region he resides in. He holds a Doctor of Creative Arts from Wollongong University, with other degrees from the University of York and Otago University. Crossman has achieved international recognition with performances in Australasia, Asia (China, Hong Kong, Japan, Korea, Taiwan, Philippines), Europe and the USA. Highlights of his career include working with the Kanagawa Philharmonic (Japan), Korean Symphony Orchestra, New Asia String Quartet at the Pacific Rim Music Festival in the USA, and with Kawamura Taiwan (shakuhachi) at the Asian Music Festival 2010 inTokyo and shihans Tomotsune Bizan and Kikuchi Kouzan’s at Asian Music Festival 2014 in Yokohama, Japan. Recent projects include performances at the ISCM World New Music Days in Beijing and Asian Composers League Festival in Taiwan in 2018, and collaborations with Korean Gugak performers, gayageum master Yi Jiyoung (Seoul) and taegŭm virtuoso Hyelim Kim (London) in 2020. Crossman lives in Sydney and works as an Associate Professor ofMusic and Discipline/Professional Field Leader, Music and Music Therapy at Western Sydney University. He contributes to the Asia-Pacific region through invitations as a Collaborator, Aichi University of the Arts, Japan in 2015, Composer, National Sun Yat-sen University Taiwan in 2019, Panellist, at Seoul National University’s 2021 SNU Online Winter Music Festival in Korea, and advisory work for the Rockefeller Foundation in New York (USA).