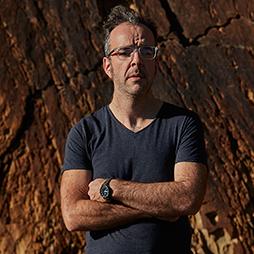 Anthony Pateras is a composer, pianist and electronic musician active since the late 90s. His work has been recognised through the 2020 Michael Kieran Harvey Scholarship, residencies at La Becque, Akademie Schloss Solitude and ZKM, fellowships from Creative Victoria, the Sydney Myer and Ian Potter Foundations, and two nominations at the UNESCO Rostrum of Composers.

Pateras has been commissioned by INA-GRM, Radio France, Südwestrundfunk, ensemble]h[iatus and Kitchen Orchestra Stavanger. He has received performances from the Los Angeles Philharmonic, BBC and Toronto Symphony Orchestras, the Australian Chamber Orchestra, Golden Fur and ICE, among many others. He has written extensively for percussion; his solos Hypnagogics and Mutant Theatre being widely performed, and ensemble works commissioned and premiered by Eklekto, Synergy, Speak Percussion and Percussion Group The Hague.

Pateras has performed and recorded in the bands North Of North, tētēma, Thymolphthalein, PIVIXKI, Beta Erko and Pateras/Baxter/Brown. He has ongoing duos with the violinist Erkki Veltheim and the electronic musician Jérôme Noetinger, and works closely with the programmer Rohan Drape.

Find out more at anthonypateras.com