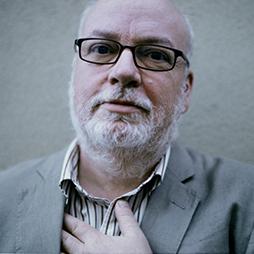 Confused Alarms
for horn and piano
Composed for Eve McEwen
First performance: 14 May 2022

Program note:
I suppose I might have called this piece Dover Beach, since it's a response to aspects of that faous poem by Matthew Arnold (1822-88). In the end, though, there were more 'confused alarms' than 'calm' seas in my seven-minute piece, and I wanted to draw attention to them.

The sea is calm tonight.
The tide is full, the moon lies fair
Upon the straits; on the French coast the light
Gleams and is gone; the cliffs of England stand,
Glimmering and vast, out in the tranquil bay.
Come to the window, sweet is the night-air!
Only, from the long line of spray
Where the sea meets the moon-blanched land,
Listen! you hear the grating roar
Of pebbles which the waves draw back, and fling,
At their return, up the high strand,
Begin, and cease, and then again begin,
With tremulous cadence slow, and bring
The eternal note of sadness in.

Sophocles long ago
Heard it on the Ægean, and it brought
Into his mind the turbid ebb and flow
Of human misery; we
Find also in the sound a thought,
Hearing it by this distant northern sea.

The Sea of Faith
Was once, too, at the full, and round earth’s shore
Lay like the folds of a bright girdle furled.
But now I only hear
Its melancholy, long, withdrawing roar,
Retreating, to the breath
Of the night-wind, down the vast edges drear
And naked shingles of the world.

Ah, love, let us be true
To one another! for the world, which seems
To lie before us like a land of dreams,
So various, so beautiful, so new,
Hath really neither joy, nor love, nor light,
Nor certitude, nor peace, nor help for pain;
And we are here as on a darkling plain
Swept with confused alarms of struggle and flight,
Where ignorant armies clash by night.

About the composer:
Andrew Ford is a composer, writer and broadcaster who has won awards in each of those capacities, including the 2004 Paul Lowin Prize for his song cycle Learning to Howl, a 2010 Green Room Award for his opera Rembrandt’s Wife and the 2012 Albert H Maggs Prize for his large ensemble piece, Rauha. He has been composer-in-residence for the Australian Chamber Orchestra, the Australian National Academy of Music (ANAM) and the Australian Festival of Chamber Music. In 2014 he was Poynter Fellow and Visiting Composer at Yale University, in 2015, Visiting lecturer at the Shanghai Conservatory, and in 2018, H.C. Coombs Creative Arts Fellow at the Australian National University. Ford has written widely on all manner of music and published ten books, most recently The Song Remains the Same with Anni Heino (La Trobe University Press, 2019). He has written, presented and co-produced five radio series for the ABC and, since 1995, presented The Music Show each weekend on Radio National.