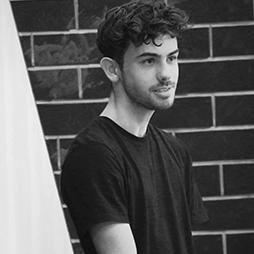 Performed at the ANAM Set Festival by
Murray Kearney (viola)

Program note:
Nowhere in Particular, scored for solo viola over an electronic soundscape, explores how identity is connected to environment. With a meandering, curious character, the viola traverses a foreign environment of strange bells, synthesisers and warped echoes, as if searching for a home in unfamiliar territory. The electronics create a warm bed of sound, though its gently pulsating harmony is unsettling in nature. Our soloist is never quite able to overcome their otherness and isolation from the environment, becoming increasingly agitated as time wears on. In the end, they abandon their soliloquy and are joined by an unexpected visitor. I chose the viola to work with on this project because I'm drawn to its dark, thick lower register and the quiet warmth of its higher range. It has the ability to express deeper, subtler shades of sound than its companions.

About the composer:
Alexander Turley’s work explores the subtleties of musical texture through a fine atmospheric lens. Originally from Western Australia and now based in Melbourne, Alex studied Composition and Music Technology at WAAPA before completing a Master of Music at the Sydney Conservatorium in 2020. Alex is passionate about the potential of storytelling through music and the elevation of diverse perspectives in traditionally classical spaces. Alex’s music has been performed by the Atlanta, Melbourne, Sydney, Tasmanian and West Australian Symphony Orchestras, Forest Collective, Intercurrent, Soundstream Collective, Argo, Grey Wing Ensemble, Golden Gate Brass, Voyces, Naya Chorale and community groups across five continents. He has collaborated with the likes of Eskimo Joe, Lucy Durack and Anthony Callea and scored theatrical productions at The Blue Room Theatre, Theatre Works, kxt bAKEHOUSEand Studio Underground WA. In 2018, Alex held composer-in-residence positions with Melbourne-based chamber outfit Forest Collective and the Kodaly Music Education Institute of Australia. His orchestral work City of Ghosts was recently featured by Robert Spano and the Atlanta Symphony Orchestra in their 2019 season to critical acclaim. So far, 2021 sees performances of new commissions from the Sydney, Melbourne and Darwin Symphony Orchestras, a collaborative work with Maningrida-based rock band Ripple Effect, an electroacoustic song cycle based on text from queer/LGBTI+ identifying Australian writers and a musical about talking pot plants.