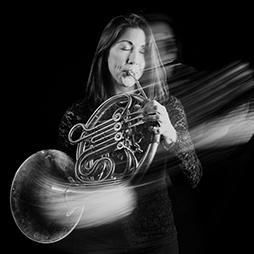 Out of the silence, Das Rheingold opens with a barely discernible Eb chord from the double basses. The ominous-sounding chord is sustained famously through the entire Vorspiel - all 136 bars! It’s at bar 17 that Wagner chooses a solitary French horn from the orchestral paintbox to brush the first ripple in the still Rhine waters. This slight disturbance is given to the eighth of eight horns. It’s a magical change, a gentle, rising arpeggio spread over five bars that is progressively taken up by the other horns as the musical waters become increasingly animated and disturbed. For the player of the eighth horn entry there’s no other orchestral colouring to blend with. Let’s just say that horn players are brave, requiring not only an exceptional sense of pitch and technique but also strong nerves for such an exposed performance moment.

Jenna Breen found herself with this moment on stage at Walt Disney Concert Hall, Los Angeles. It was April 2017. She was substituting as that solo eighth horn with the Los Angeles Philharmonic and conductor Philippe Jordan, music director of Opéra National de Paris, in a 'Best of the Ring' concert, not out of sight in the shades of the pit but on a fully-lit stage. Certainly nowhere to hide!

By this time in her career Jenna had secured a position with the Seattle Symphony as permanent Second Horn. She had spent a year at ANAM in 2009 on a scholarship, following her tertiary studies at Queensland Conservatorium of Music, Griffith University. Jenna’s teacher at QCM was Peter Luff, whose guidance was integral to Jenna’s development and success. What does Jenna remember most of that year? “Lots of Ligetti! A lot of music in general, practically living at South Melbourne Town Hall and being part of a close-knit student body.”

Jenna grew up on the Sunshine Coast, north of Brisbane. Her older brother was a talented trombonist, and an incentive for Jenna to take up an instrument. She started playing the flute in Grade 4. At the end of that year her music teacher recommended that Jenna try the French horn because of her good sense of pitch; the school’s only other horn player had moved on. Jenna took the teacher’s advice. She continued playing both the flute and French horn until Grade 11, when she elected to pursue horn-playing as a career. During this time at school she gained ensemble experience with the school band and the Sunshine Coast Youth Orchestra. Jenna was the recipient of several secondary and tertiary scholarships and awards: Matthew Flinders Anglican College Music, Sir Samuel Griffith Academic and Kurt Blumenthal Music scholarships, Brisbane Women’s Club and Yvonne Haysom Women in Music Bursary. After completing her BMus in 2008, the following year at ANAM provided Jenna with invaluable performance-based experience for launching a professional career.

Reflecting on her time at ANAM, Jenna singles out the exceptional teachers and guests from around the world, regularly visiting and in residence, and being surrounded by similar like-minded talented and hard-working young musicians, all providing the unique stimulus and incentive to becoming a better player.

“The amount of music, and versatility of programming and performance opportunities, helped me experience different avenues possible in a music career, and decide exactly where I wanted to focus. The sheer amount of repertoire we worked through taught me how to multi-task and prioritise, which has come in very handy now that I am regularly learning two programs worth of music every week."

Jenna has had a busy and varied concert life since then. Prior to Seattle, her orchestral experience included permanent positions with the Melbourne and West Australian symphony orchestras, and playing as a guest with the Queensland and Adelaide symphony orchestras, the Malaysian and Los Angeles Philharmonics and the Australian Chamber Orchestra. There was also a stint in 2010-2011 with the pit orchestra for the stage musical of Mary Poppins.

She has two especially memorable concert moments. The first was on tour with the MSO and Sir Andrew Davis in 2014, playing in a sold-out Royal Albert Hall Prom that included Strauss’ Don Juan and Berlioz’ Symphonie fantastique. The second, that just happened to be on Jenna’s birthday in 2017, was playing in Seattle in another sold-out concert with John Williams conducting the Seattle Symphony in a program of his film music, mostly from the movies of Steven Spielberg. A surprise, let’s call it a private unorchestrated Jenna birthday moment, was Spielberg joining John Williams and the musicians on stage for the second half, telling stories about the shared careers of Williams and himself, and then introducing the concert’s remaining works.

Talking about recent and future music projects, Jenna mentions performances in 2019 of Beethoven’s Septet – in Seattle Symphony’s Chamber Music series - and of Robert De Leeuw’s Im Wunderschönen Monat Mai, a reworking of songs of Schubert and Schumann for actor-singer and small ensemble. Jenna had played in an ANAM performance of this work, featuring Australian cabaret artist Meow Meow, and proposed a performance for Seattle Symphony’s late-night series.

This talk of exciting moments and orchestral life raises an important question all musicians must face in their early real-world days: how to transition from studies to an established and fulfilling career. Jenna’s insights from her own experiences are invaluable for emerging professional musicians.

“For me, one of the hardest parts about transitioning into a professional orchestral career has been to keep extending my limits. We set such high standards of ourselves on a daily basis within the orchestra that sometimes it can be hard to push beyond our comfort zone. As a section player, I find that if I don’t create opportunities that test me I can get too comfortable in my playing. I am lucky to play in an orchestra that gives its musicians regular chamber and solo opportunities and I try to take advantage of that. Often these performances scare me and make me uncomfortable, but this is an important position to put yourself in to keep growing as a musician.”

What about the additional learnings from travelling, and living and working overseas? “It probably doesn’t matter where you are; you will always have professional and personal challenges to navigate and deal with. It really comes down to how you respond to these situations and how much you let them affect you.” Jenna also mentions the logistics of practising while travelling and, when she’s not obsessed about a strict routine, taking time for the experience of the travel itself.

In her personal life, Jenna is now settled, for the time being at least, in Seattle, Washington State, in the NW corner of the United States. It’s a wonderfully-situated city on the waters of Puget Sound, with a backdrop of forests and mountains that suits perfectly her love of the outdoors. She makes regular use of the many hiking trails and a park close by her home for walking her dog, a very fortunate cavoodle brought over from Australia. Jenna also runs and is currently training for her second half-marathon.

Aside from her regular orchestral work with the Seattle Symphony that includes occasional education concerts, Jenna also gives private lessons and is involved with another entirely separate orchestra, Seattle Youth Symphony Orchestra, in its Endangered Instrument Program. This innovative secondary school project supports music students and their teachers by providing specialists in less-commonly played instruments from Seattle’s professional orchestras for lessons and coaching.

As a complete switch-off from her music, Jenna has taken to gardening, a perfect way to be hands-off and away from the horn, and an opportunity to get those precious fingers dirty.

One of the regular on-the-spot questions for ANAM alumni is to name a favourite piece of music. For a French horn player, those titans-for-brass composers, Mahler, Bruckner, Wagner and Strauss, come to mind. Jenna baulks.

“I can’t even choose a favourite composer! Almost anything by Beethoven, Brahms or Richard Strauss. Though I must admit, having already performed Beethoven’s Symphony no. 5 at least 20 times, I still love it every time.”

Jenna’s love for music-playing is deeply felt. If the horn-playing opportunity at primary school hadn’t arisen, she would have continued with the flute. “I sometimes listen to our principal flute play his amazing solos and get a little jealous!” In another life she would also love to play the cello. In yet another life, and one completely away from music, a connection and involvement with animals appeals.

There’s one award mentioned in Jenna’s CV, a single line that belies an important achievement at any stage of life in any discipline. In 2014 she was awarded a Winston Churchill Memorial Trust Fellowship. Her proposal for this particular fellowship was to study low-horn performance methods with the world’s top orchestras. [A digression: Horns are traditionally grouped as 'high' and 'low' to cope with the extreme-range capabilities of the instrument - and whatever the devilish composer may have scored! Consequently, horn players usually specialise in one of the two groups, either high or low. Jenna is a low-range horn player. In a section of four horns, for example, First and Third are high, Second and Fourth are low.]

For the Fellowship, Jenna spent six weeks travelling around Europe and USA, meeting and discussing aspects of low-horn orchestral playing, both in rehearsal and performance, with key horn players from some of the best orchestras in the world. A key objective was to apply these learnings to her work at the time as teacher and orchestral player. You can read the result of her Fellowship HERE.

From her own time at ANAM and her considerable experience with different orchestras over the past decade, Jenna has good advice for any musician wanting to make the most of their time at ANAM.

“Work hard and take all the opportunities you can before life’s responsibilities catch up with you. Use the multitude of resources available to you at ANAM. Don’t be afraid to ask for help. Record yourself!"

“Ultimately”, she says, “trust your gut instincts and what you think is best for you.”. On playing, whether it’s practising, rehearsing, auditioning or performing, she is succinct: “You can never be too prepared, especially for auditions. Preparation is the key!”

Jenna is equally succinct about the best advice she’s ever been given. “Prove the doubters wrong!” This resolve originates from a difficult lesson at ANAM, in which a visiting in-residence brass player suggested that her reserve, apparent in the lesson, would impede her playing and prevent her ever becoming a professional. Fortunately, a later, wiser talking-to from another professional player gave Jenna the confidence and belief in herself. From such moments brave decisions are made that forge and sustain a career; stepping-stones, both slippery and rewarding, that must be faced and taken along the way, one being that notorious solo evoking the waters of the Rhine.