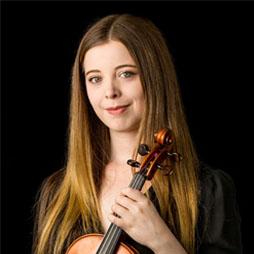 With two ballet dancers as parents, Iona Allan (violin, 2016) grew up in a house that was always filled with classical music. It was of course only natural that she learnt all forms of dance, with tap being her favourite. But it was starting violin at the tender age of four that Iona would find her true passion.

This passion would see her complete a Bachelor of Music in Advanced Performance from the Queensland Conservatorium studying under the tutelage of Michele Walsh. A testament to her training, she managed all of this without completing her final year of secondary school. Breezing through a short bridging course, she was accepted for early entry into the Queensland Con at 16.

This continued drive led her to ANAM. Working with Dr Robin Wilson, the pair planned her path over the three-year performance program, and spent much of her final year preparing for international auditions.

‘I knew I wanted to complete a Masters in London’ Iona says.

She, in fact, auditioned for both the Royal College of Music and the Royal Academy of Music and found it daunting to decide between the two. At the College audition, Iona asked Gabrielle Lester (founding member of the Chamber Orchestra of Europe) if she would take her on as a student. This of course helped her to make the decision, but she still factored in some sound advice stating that ‘it is important to be happy with the Institute, not just the teacher.’

To assist with this first move overseas, Iona applied for and was awarded the very competitive and prestigious Ena Williams Award offered by Queensland Conservatorium Griffith University, and will depart for the UK in September 2017. She was also recently awarded assistance by the Royal College and Music, starting as an RCM Scholar in September of 2017.

Many musicians might rest on their laurels knowing that they had their place and path secured, however Iona has since been very busy with freelance work with the Melbourne and Queensland Symphony Orchestras, and on the recent Baroque tour with the Melbourne Chamber Orchestra, with another planned for June.

Without ANAM, Iona says she wouldn’t have had the confidence, experience or repertoire to succeed as a freelance musician, or in her London auditions. ANAM was the perfect preparation for an exciting international leap.