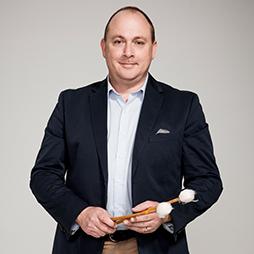 Guy du Blêt will never know whether his celebrated career as a timpanist is down to wishful thinking by his Dad (a frustrated drummer from way back), his first drum teacher Paul Collins (possibly channeling the more famous Phil) or whether it was just good old-fashioned talent, but at the age of eleven he discovered the world of percussion via the compelling beat of Eye of the Tiger and his future was set.

After spending his early years in Melbourne, a move to Queensland resulted in Guy attending Brisbane Boys’ College where, regardless of his prowess with Eye of the Tiger he says he “almost failed” year eight music. In spite of that (or perhaps because of it) he was mentored by his high school percussion and drumkit teacher Russell Pearce, who steered him towards the University of Queensland and the Queensland Symphony Orchestra, to be taught by Markus Lutz.

Heading south again, Guy arrived in Melbourne just in time to join some of the first programs being offered at the brand new Australian National Academy of Music (ANAM). Reflecting on those early ANAM days, Guy recalls walking through the doors at the South Melbourne Town Hall to discover a kind of electricity in the air, something he attributes to the enthusiasm of then General Manager Trevor Green. “He surrounded himself with really talented and energetic staff who were allowed to use their initiative and give everything to the programs they were bringing to life… the students couldn’t help but be deeply affected by the collective energy and goodwill of the building and the people working inside.”

Taking part in short programs such as chamber music festivals and contemporary music programs, Guy says he was extremely lucky to work with Cathy Milliken and Dietmar Wiesner from Ensemble Modern. Later, he was a guest of Synergy Percussion on their tour of Sydney and Melbourne and simultaneously took part in their residence program at ANAM. Dividing his time between Sydney and Melbourne, Guy was participating in short courses at ANAM, as well as playing as a casual with the Sydney Symphony Orchestra, Australian Opera and Ballet Orchestra, Sydney Opera House Orchestra, Synergy Percussion, his own percussion ensemble SPRUNG, teaching at a couple of high schools and giving solo recitals anywhere he could. It was a time of frenetic activity that created a momentum he is certain contributed to his success.

At the tender age of 23, Guy auditioned successfully for a position with the State Orchestra of Victoria (now Orchestra Victoria), and, despite another offer from the Malaysian Philharmonic on the very night of winning his position at OV, “dropped everything” to join them. He was introduced to “all this music I had not ever played and a really wonderful group of colleagues who, when I look back, were extremely understanding of me and my inexperience, as they allowed me to find my own way and learn from my mistakes”. He puts his love for opera down to “the collective goodwill of my colleagues”, as he doesn’t believe it’s possible to be moved in such powerful ways without the trust and love of one’s colleagues when playing works such as The Marriage of Figaro, Tosca, or the Ring Cycle.

While his studies and work with OV had been thrilling, Guy reached a point where he felt that his “ears and mind and body started asking questions about my playing, technique and entire musical concept”. Embarking on a new path, he travelled to Berlin for some private study with Rainer Seegers, then Solo Timpanist with the Berliner Philharmoniker. Now retired, Seegers was (and remains) Der König of the timpani.

Berlin the city and the Berliner Philharmoniker play a central role in Guy’s life. One of his most treasured musical experiences is seeing the Berliner Philharmoniker play for the first time, an emotional experience he says he will never forget. Another fond memory of that time takes him backstage at the Philharmonie in Berlin in the early hours of the morning, when one of the percussionists, a horn player and viola player wheeled a Steinway piano onto the stage and played the blues… an experience he is unlikely to forget in a hurry. His most recent visit was in 2014, when Orchestra Victoria commissioned two sets of timpani from the Hardtke Timpani Workshop. Guy describes the instruments not only as beautiful, but something that provides him with everything he needs “to continue my journey, which really is the journey of learning how much more I need to learn”.

In a career scattered with diverse highlights, one of the standouts was being invited to curate the opening night of the Melbourne Recital Centre. The feature work was the world premiere of Peter Sculthorpe’s Song of the Yarra, written as a resonance of the plight of Indigenous Australians and a celebration of the moment in 2008 when the Federal Government apologised for past wrongs. Divided into three parts (Morning Star, Healing Waters and Rainbow’s End), the work traces the flow of time from night to morning and then from dawn through the full day. Working with the composer, ensemble and violin soloist, Gidon Kremer, Guy says it was “a real gift to bring Peter’s work to life in such a spectacular way”.

Generosity is a word that crops up often in discussions around his career, and Guy believes it is a vital element in becoming… and staying… a professional musician. “As a young player and student in Sydney, I was the recipient of tremendous generosity from the players in the Sydney Symphony. I was given a chance. It was a similar feeling some years later in Berlin in 2007 on my study trip. I was welcomed by the timpani and percussion players, and many other members of the Orchestra into their home and shown respect and openness and genuine interest in why I was there, and how could they help me on my quest.”

While the past year (2020) has been quiet on the performance front, Guy says it has also been a time of opportunity. He was the founder of the Orchestra Victoria education program, mOVe (now On the Move) which has been running for over twenty years, branching out from its genesis in Bendigo to high school music students, teachers and families throughout regional Victoria. Lockdown prompted a number of new initiatives including OV’s ‘MAP’ (Mock Audition Program) designed for Australian musicians aged eighteen and over, who selected and submitted repertoire from the world of opera and ballet in video format, which was then assessed by two orchestra members.  An online feedback session followed, providing a unique opportunity for experienced orchestra players to share their knowledge with a future generation of colleagues.

Heading into his twenty-third season with Orchestra Victoria, Guy continues to be inspired by former colleagues, Paul Sablinsksis (Associate Principal Percussion, retired 2014) and Bob Augustinas (Principal Timpani, retired 2006) who for him, epitomise a commitment to their craft, their colleagues and their understanding of three axioms: to help tell the story; to let the instrument do the talking: and to realise it’s not about the individual. He also relishes the chance to work with new colleagues like Principal Percussion, Mathew Levy, another ANAM Alumnus from 2017.

Guy regards ANAM as a special place. “Special people come here to work and special things happen – maybe some magic happens. Like most things which appear magical, there is a lot of effort, thought and hard work going on and it is my continued privilege to be involved in this unique institution”. Happily for him, and for many subsequent students, he has continued to be part of programs at ANAM under both Brett and Paul Dean, and more recently Nick Deutsch, giving lessons and classes, and participating in concerts with Simone Young and the Australian World Orchestra. In 2013, Guy curated TYPOSIUM!, a celebration of the anniversaries of Benjamin Britten, Giuseppe Verdi, Igor Stravinsky and Richard Wagner.

Whether any of those works can hold a candle to Eye of the Tiger is a secret that only Guy du Blêt knows the answer to, but as post-pandemic performances gradually begin, it does seem fitting that it was a hit for a band called Survivor.

For more stories about Guy’s passion for early music, and his parallel career as a maker of tambourines, read Vol. 39 of Music Makers (released in April 2021). 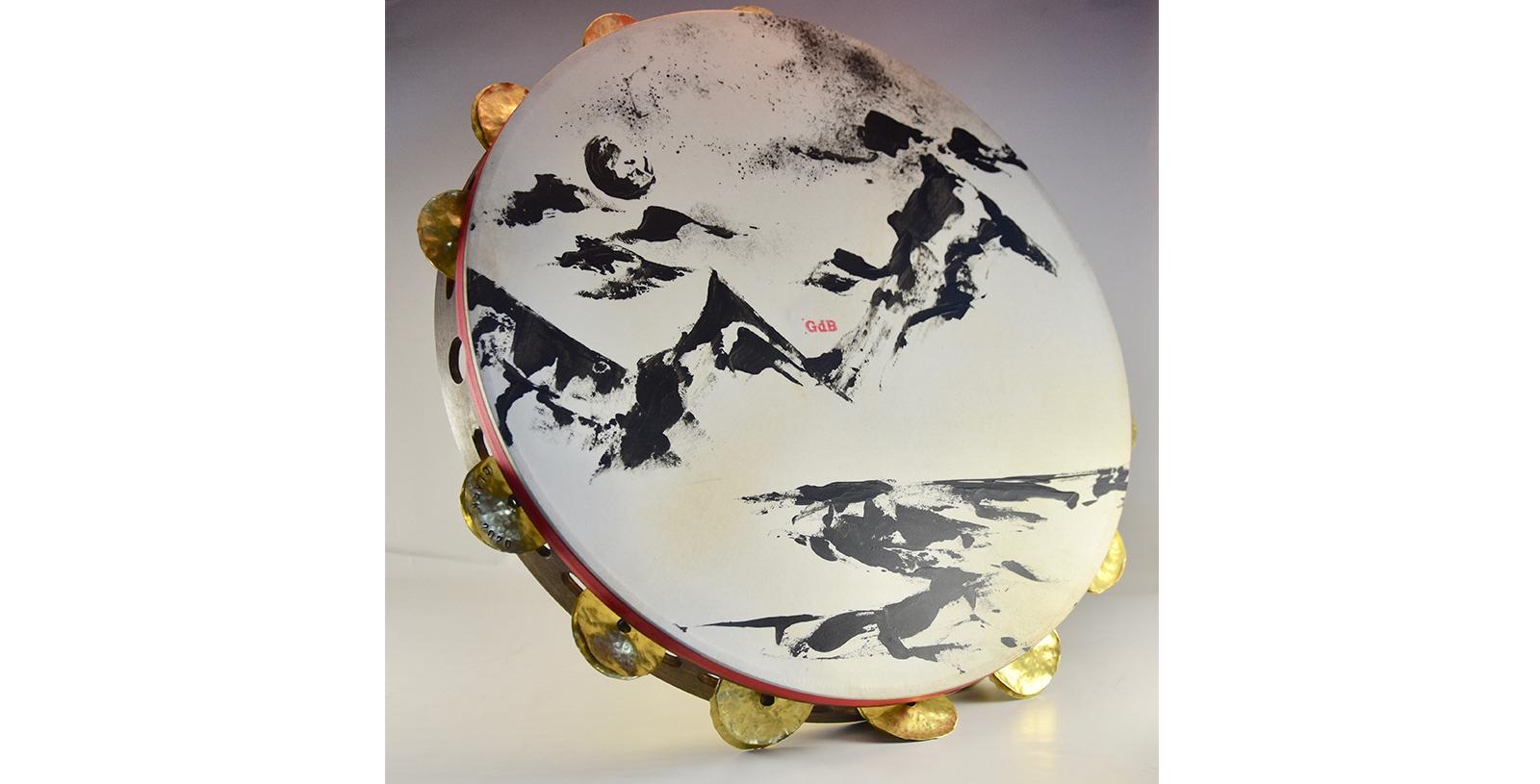