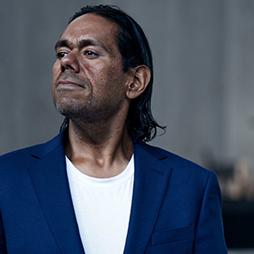 Composer, producer, multi-instrumentalist and vocalist William Barton is widely recognised as one of Australia's leading didgeridoo players and composers.

For two decades, William Barton has forged a peerless profile as a performer and composer in the classical musical world, from the Philharmonic Orchestras of London and Berlin to historic events at Westminster Abbey for Commonwealth Day 2019, Anzac Cove and the Beijing Olympics. His awards include Winner of Best Original Score for a Mainstage Production at the 2018 Sydney Theatre Awards and Winner of Best Classical Album with ARIA for Birdsong At Dusk in 2012. With his prodigious musicality and the quiet conviction of his Kalkadunga heritage, he has vastly expanded the horizons of the didgeridoo — and the culture and landscape that it represents.

Today he holds honorary doctorate degrees from the Universities of Griffith and Sydney, has had released five albums on the ABC Classics label and is an Artist in Residence at Melbourne Recital Centre. His most recent album, Kalkadungu: music for didjeridu and orchestra, features predominantly his own compositions, alongside those of Delmae and Peter Sculthorpe.

“I’m doing what I love. I want to take the oldest culture in the world and blend it with Europe’s rich musical legacy. I guess what I’m doing is giving back: giving back to my culture and my people because I was given something when I was very young and like the old fellas who taught me years ago, I’m just passing it on.” – WIlliam Barton

Find out more at williambarton.com.au