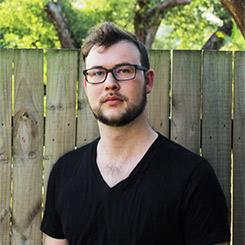 Program note:
Romanza is a piece which has nothing to do with the romantic, in the amorous sense of the word, but is about the passionate and idealistic. In a way the violin is the perfect instrument for such a task as its very sound is so steeped in tradition and layers of meaning, but is also an instrument of incomparable expressive breadth. It can sing without words and create images without paint, in this way it does what music is best at, it articulates feelings which are less clear when described with words but can be felt and heard with great clarity. The piece is turbulent and impassioned, the piano and violin form equal partners in this musical dialogue and weave singing melodies through undulating figures which swell and team, ardently reaching out to each other through the air and space where their sounds mingle and become one.

About the composer:
Growing up in a musical family, John’s passion for music started at an early age. After starting piano at the age of six, he turned his hand to composition at nine, and at twelve had his first orchestral work performed by the Bundaberg Youth Orchestra. Since then John has had his works performed, commissioned and recorded by the Queensland Symphony Orchestra, Queensland Youth Orchestras, The Australian Voices, Southern Cross Soloists, Australian Youth Orchestra, Michael Kieran Harvey, Flinders String Quartet, UQ Symphony Orchestra, among others. John is also an active performer, playing the trombone in various groups in Brisbane as well as regularly singing with The Australian Voices.