Exploring the Universe of Xenakis

One of the most striking aspects of the music of Iannis Xenakis is just how unlike anything else it sounds. In Xenakis’ hands, sound is no musician’s mere plaything confined to the limits of any dogma, compositional or otherwise. Instead, it takes on a life of its own, in turn ephemeral and eternal, releasing as the critic Tom Service observed, “a power that previous composers had only suggested metaphorically.” Yet to call Xenakis ‘composer’ is to do him a disservice; what makes his work so inspiring is the way in which it almost seamlessly integrates apparently disparate elements – music, physics, mathematics, philosophy – into a living, breathing whole.

As a youth studying engineering in Athens, Xenakis, who considered himself an ancient Greek exiled to the twentieth century, divided his spare time between reading Plato and going on extended cycling trips to visit nearby historical sites. This idyll was disrupted by the 1940–41 Axis invasion of Greece, which saw him join the Greek communist movement through which he helped organise one of the most successful anti-Nazi resistance campaigns of the Second World War. The chaos and raw entropic energy of the mass strikes, punctuated with the ‘whistling of bullets’ and ‘crackling of machine guns’ became the seed of Xenakis’s vision for a new music. Drawing on the dialectical approach of the Greek philosophers as well as Marxism, Xenakis conceived a music of massed sound, constantly in flux: individual sounds are vital to, but lost within, the totality – like raindrops in a storm, or people and gunfire in a demonstration.

Xenakis survived an explosion that left half of his face deformed only to be sentenced to death after the War
by the right-wing monarchist regime favoured by the victorious Allies. He was smuggled out of Greece and into France, where, in Paris, he found work as an engineer in the studio of the architect Le Corbusier. Through him, Xenakis eventually transitioned to doing architecture himself.

Famously, he worked on the Philips Pavilion for the 1958 Brussels World Fair, a building whose graceful form was based on the curves approximated by string glissandi in Metastasis (1954) – Xenakis’ terrifying realisation of wartime urban chaos. He would go onto employ probability theory to design musical structures of even greater intricacy and intensity; create spectacles of sound and light, musical ‘games’, pieces produced entirely by computer programmes, and much more.

2022 is Xenakis’s centenary year, and on May 27, ANAM brass and percussion musicians will pay homage to the music of this remarkable polymathic figure in a concert entitled The Xenakis Universe. It will situate his work within the web of influences vital to this rich creative world; exploring the generational link from his early mentor in Paris, the great composer Olivier Messiaen, to his student Pascal Dusapin; and the mutual influence between Xenakis and the Polish composer Witold Lutosławski. This celebration of one of the most exciting figures in music is not to be missed! 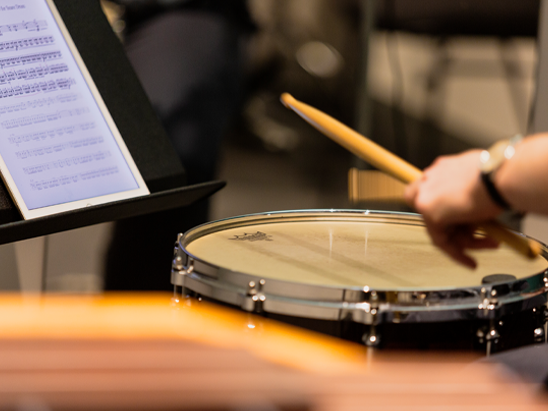