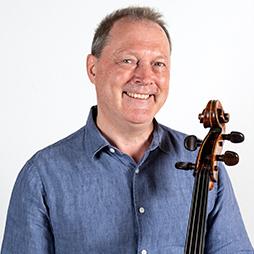 Howard Penny was born in Canberra and after studies with Nelson Cooke moved to Vienna, studying with Tobias Kühne, André Navarra, Boris Pergamenshikov and William Pleeth. Winning the ABC Young Performers Competition, and a finalist in the Prague International Cello competition, concerto performances include Sydney Opera House, Vienna Musikverein and Konzerthaus, Berlin Schauspielhaus, Suntory Hall Tokyo and Casals Festival Prades. A regular principal cello with Vienna Chamber Orchestra, Australian Chamber Orchestra, Camerata Salzburg and Vienna Radio Symphony, he is a long-standing member of the Chamber Orchestra of Europe, working regularly with the world’s leading conductors and soloists, participating in over 100 CD and video recordings with such artists as Abbado, Harnoncourt,  Solti, Haitink, Kremer, Argerich and Domingo.

As a chamber musician he has appeared in Wigmore Hall, Salzburg Festival, Beethoven Festival Bonn and KREMERata Lockenhaus, and was awarded the Gold Medal for services to the Republic of Austria. Fifteen years with the Beethoven Trio Vienna also took him to major halls in the U.S. and Japan. A regular guest with Concentus Musicus (Harnoncourt) and for ten years Lecturer in Historical Performance Practice at the University Mozarteum Salzburg, he was musical co-director of two Mozart operas for the 2006 Salzburg Festival complete cycle. A specialist in recitative realisation he was engaged for a new production of Don Giovanni for the Vienna Festival, a prize-winning Coronation of Poppea in Melbourne, and for seminars during the Mozart Week in Salzburg with Angelika Kirschlager. Frequently directing from the cello he has led a large variety of repertoire including a Haydn opera with Sara Macliver and Steve Davislim at the Australian National Academy of Music (ANAM).

His numerous CD recordings include works for solo cello, a live recording of Beethoven’s Triple Concerto from the Vienna Konzerthaus, major works for piano trio with the Beethoven Trio Vienna, first recordings of Boccherini quintets and sextets, and many other chamber works. Since returning to Australia in 2010 he has appeared at most prominent chamber music festivals, including his own Sanguine Estate Music Festival, and works closely with AYO, also as guest director of National Music Camp and Chamber Players. He has been a member of the Artists of the Australian National Academy of Music (ANAM) in Melbourne since 2007, where he is now very happily based.