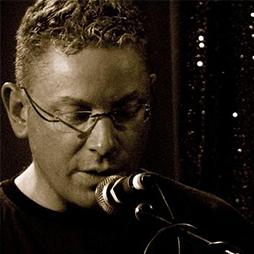 A Black Dog Near Me
for flugelhorn and piano
Composed for Joel Walmsley
First performance: 3 Dec 2021

Program note:
A Black Dog Near Me is a reflection on our mental health. The flugelhorn and piano together embody a journey that can sometimes feel like climbing a never-ending mountain. Several times the music slows to a stop, then starts again like the dawn of a new day, until finally it ends by asking a question that cannot be easily answered. Everyone has a different journey, and can perhaps relate to this piece. The title comes from a poem called Melancholia by Robert Bly.

About the composer:
Andrew Batterham is an Australian composer, arranger, songwriter, and performer. He is active across many genres including art music, jazz, corporate music, big bands, TV, and educational music. His music has been performed, recorded and broadcast in Australia, Asia, Europe and the USA, by artists ranging from jazz legend James Morrison to the Melbourne Symphony Orchestra.

After studying composition with Brenton Broadstock, Andrew worked as a trumpet player and pianist in the Melbourne commercial scene. Upon winning the Qantas Youth Award of the Paul Lowin Prize, he travelled to New York and London to study with Ian Finkel and John McCabe. He has been awarded the Corbould Composition Prize, commendations in National Songwriting Contest, and commissions from the Melbourne Symphony Orchestra.

Commercially, Andrew’s compositions and arrangements achieved widespread success. His recent activity includes Concertino for solo tuba and wind band (winner of the Harvey Phillips Award), premiered at the São João Festival in Portugal; residencies at the Sydney International Brass Festival and the Gravissimo festival, Portugal, and CD releases for Tall Poppies and Cala Records (UK). Andrew also received an ABC Fresh Start Fund grant for his Trumpet Concerto to be recorded by David Elton and members of the Sydney Symphony Orchestra, and an Amex Music Backer’s Fund grant to record his funk band Speakeasy at Melbourne’s iconic Sing Sing studios. His Speakeasy song Straight Ahead won the Soul and RnB category of the Voyager International Songwriting Competition.