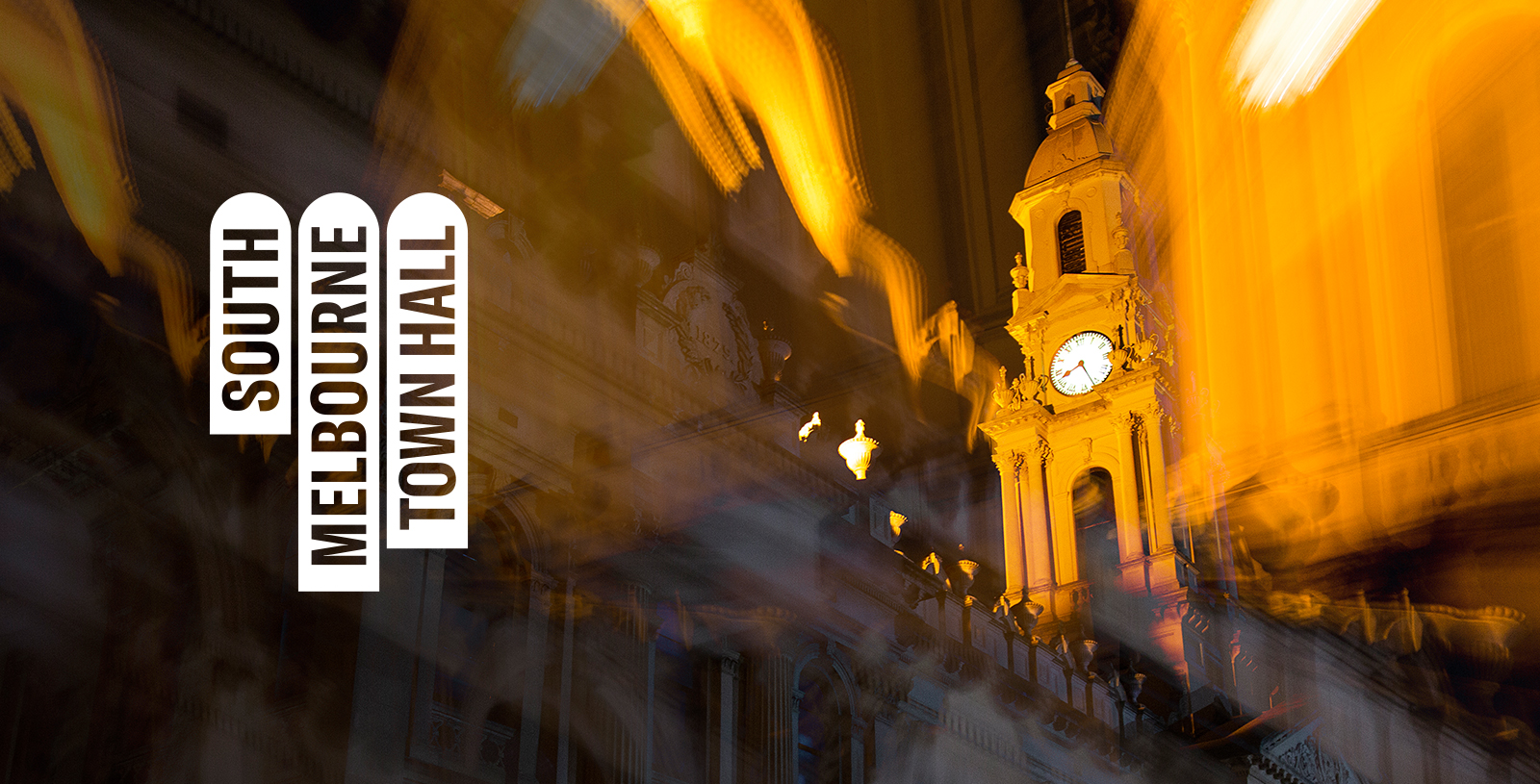 PLEASE NOTE: The South Melbourne Town Hall has been closed for bookings until further notice.

The South Melbourne Town Hall, resting on the lands of the Boonwurrung people of the Kulin nation, is one of Melbourne’s most impressive civic buildings, with a commanding location on Emerald Hill in the heart of South Melbourne.

Every year the Australian National Academy of Music (ANAM), the building’s major tenant, presents a program of more than 180 performances and activities in the South Melbourne Town Hall for its diverse communities of listeners. This expansive program has put the grand historic building on the city’s performance map, making it a destination venue of growing stature.

The Main Hall is one of the city’s most beautiful municipal halls, affording an intimate performance space, superb natural acoustics and commercial recording facilities.

ANAM, in partnership with the City of Port Phillip, is making available the building’s Main Hall and a number of its beautifully renovated meeting and function rooms for hire to the public for performances, meetings, conferences, dinners and functions.

There are a number of beautiful rooms in the South Melbourne Town Hall available for hire, from the large auditorium to intimate, 19th century function rooms, perfect for cocktail gatherings, meetings and small receptions.

For thousands of years the high ground of Emerald Hill, surrounded by swamps and marshland, was an important social and ceremonial gathering place for peoples of the Boonwurrung of the Kulin nation.

Following white settlement of the region in the 1830s the self-proclaimed chronicler of Melbourne’s early settlement Edmund Finn wrote:

The Hill was covered with a rich sward, green as the freshest shamrock; no houses in sight except those of the then small Melbourne; trees scattered about, and the whole eminence encircled by shining lagoons, the sparkling sea, and growths of scrub and ti-tree along the Sandridge road-side, and away to Fisherman’s Bend.

In 1854 the government granted the land on the Hill to the Melbourne Protestant Orphan Asylum, which was opened in 1856, becoming home to over 300 young people.

Emerald Hill had gained its independence from the Melbourne Council in 1855 – being the first municipality to do so - and the confidence that this afforded the new municipality ushered in a period of expansion, with the population of the area increasing three-fold over the following 15 years. Riding the wealth that flowed from the Victorian gold rush, this growth fed the pride – and coffers – of the new borough, and it was decided that a town hall building that suitably reflected the burgeoning city’s stature was needed. The obvious location was the Hill, and so the orphanage and its residents were quickly dispatched south down to Brighton and the site cleared to make way for a building of appropriate magnificence.

An expression of the era’s civic confidence and wealth, the then Emerald Hill Town Hall was designed by architect Charles Webb and built between 1879-80. For Webb, who was also responsible for Melbourne’s St Paul’s Cathedral, the Windsor Hotel, and the Block Arcade, the Emerald Hill Town Hall was one of his most significant contributions to Melbourne’s early architectural landscape. The building originally housed the Emerald Hill Council, as well as at various times a Mechanics Institute, Library, Post Office, Courthouse, Police and Fire Brigade.

In 1994 the municipalities of South Melbourne (as Emerald Hill was renamed in 1883), Port Melbourne and St Kilda were amalgamated to form the new City of Port Phillip, and council administration relocated to the St Kilda Town Hall. Some council activities were retained in the west wing, and ANAM became the otherwise vacant Town Hall’s principal tenant in 1997. ANAM’s young musicians now fill the old building with music from morning until evening: it is the only building in the country - perhaps the world - wherein one can both pay a parking fine and listen to a live performance of Mozart in the same visit.

So a powerful thread encircles this neighborhood, from the days of being a gathering place of ceremony and celebration for members of the Kulin nation, to a site of refuge for abandoned young people; from a grand monument of self-conscious civic splendor and municipal administration, to a place that now dances with the youthful music-making of the country’s most brilliant young musicians. By drawing together a broad and diverse community of artists, musicians and listeners from across the municipality and further afield, Emerald Hill is now a public gathering place once again.

The City of Port Phillip and ANAM are working together to ensure that the South Melbourne Town Hall continues to be a vibrant gathering place and hub of community and cultural focus, engagement and activity. In addition to the bustling performance program presented by ANAM each year, the City of Port Phillip in partnership with ANAM is making the building’s beautiful Main Hall and function rooms available for hire to the public.

During its annual program year of 33 weeks, ANAM presents over 180 public events in the South Melbourne Town Hall, the majority of them free to residents of the City of Port Phillip. There are numerous opportunities both during these weeks and in the weeks outside of this time when the Town Hall’s various spaces are available for hire by the community and other organisations for private events, functions and performances.

The City of Port Phillip and ANAM are committed to ensuring that the activation of the South Melbourne Town Hall with performances, cultural events and other activities will bring vitality and vibrancy to the precinct, providing a myriad of opportunities for engagement to all residents of the City of Port Phillip.