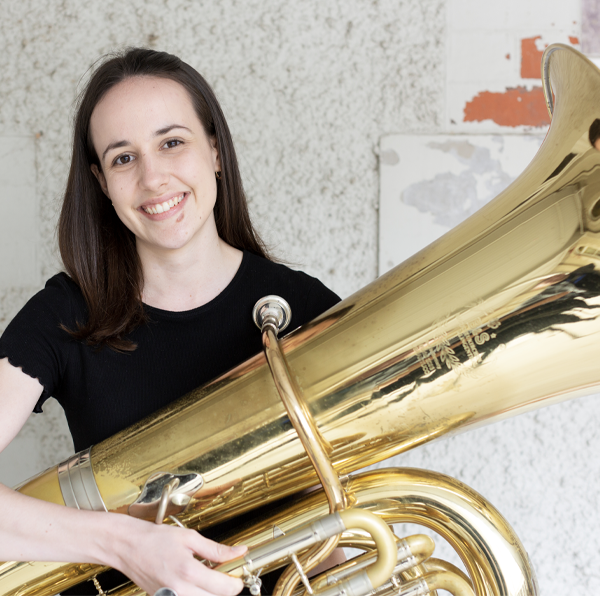 Born and raised in Brisbane, Rachel Kelly has played the tuba since she was nine years old. After graduating with a Bachelor of Music in Performance from the Queensland Conservatorium Griffith University under the tutelage of Thomas Allely, Rachel has been training at the Australian National Academy of Music (ANAM) since 2021, under the guidance of Steve Rossé and Karina Filipi.

Throughout her career to date, Rachel has performed with the Queensland Symphony Orchestra, Australian Youth Orchestra, alongside musicians of the Tasmanian Symphony Orchestra, as well as performing in numerous projects as a freelance tuba player. Since 2017, she has worked closely with chamber group, The Boxties, and with this ensemble has performed in several original shows, including at the Queensland Performing Arts Centre. Working with this ensemble has been a hugely formative experience for Rachel, and has sparked her drive to make meaningful music with others and find a new role for the tuba as a chamber instrument.

Rachel made her solo concerto debut in 2020 alongside the Queensland Conservatorium Symphony Orchestra and last year was a semi-finalist in the 2021 ANAM Concerto Competition. During her time at the Queensland Conservatorium, Rachel was awarded first place in the 2020 Beta Sigma Phi Brass Prize and was a recipient of the Sir Samuel Griffith Scholarship.

When not playing music, Rachel enjoys catching up with friends over a soy flat white.

FROM: Brisbane, QLD. Lands of the Jagera/Turrbal peoples.