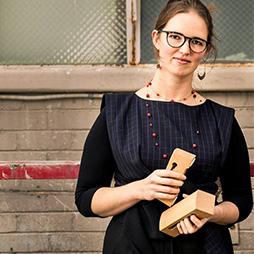 From South Melbourne to Banff… Thea Rossen has had a striking career since her ANAM training concluded in 2016, as Jennifer Gilchrist explains.

A late Middle English word, the noun 'percussion' comes from the Latin 'percussio', which in turn comes from the verb percutere, which means 'to strike forcibly'. It seems a rather inadequate definition for such a broad and varied musical form… but more on that later.

Like many musicians, Thea Rossen grew up in a musical household. Her mother, a visual artist, was an accomplished pianist and flautist, as well as playing piano accordion and classical guitar, and it was these incidental performances at home that a young Thea and her sister were accustomed to hearing as part of their everyday life, and each night as they went to sleep. Add to that a “heavy rotation” of recorded classical music played around the house and regular trips to the opera, and a musical career is unsurprising, although the choice of instrument turned out to be slightly less conventional.

Thea’s formal musical education began early, with lessons in piano and voice, but in her late teens, as she embarked on her last couple of years at school, she became aware of “the excitement of large orchestral works” and discovered “the incredible rush of excitement at seeing the percussionists stand up to play a huge cymbal crash or timpani passage in a symphony concert”. To this day, she pinpoints a truly memorable performance of Messiaen’s Turangalîla-Symphonie (conducted by Simone Young with WASO) as a milestone in her musical education.

In addition to musical households, another common theme for many successful musicians is an inspiring teacher, and Thea was lucky to learn from several. After seeing a performance by a group called Tetrafide at her high school as part of a Musica Viva in Schools program, Thea “immediately signed up for lessons” with Louise Devenish, a performer with the group who just happened to teach at Thea’s school. They went on to work together throughout Thea’s university years, where she also studied under “the wonderful Tim White, who welcomed me into the percussion community in Perth”. Later, when Thea moved to Melbourne to take up a place at ANAM she experienced “an amazing three years” with Peter Neville (Head of Percussion).

For many, the choice of a career in music is clear, but Thea took a few years before deciding to follow that path.  Having begun her studies at university with a double degree in engineering and music, it wasn’t until she returned from the 2009 Australian Percussion Gathering, directed by Vanessa Tomlinson at Griffith University in Queensland, that she realised she wanted to pursue music more seriously and changed to a single Music Major degree. The clincher came when she arrived at ANAM and saw the “incredibly varied options available to a practicing musician, creator and educator”. Only then did she decide to “commit fully to creating a life and career in music and performance”.

Thea still feels “very lucky” for the three years she spent in South Melbourne, as she says it gave her a network of colleagues and friends with whom she works regularly, as well as helping to shape the way that she has built her business and structured her creative projects.

“Much of the professional work that I am doing now (three years after graduating) is connected to projects that I began, or was involved with, during my time at ANAM. The really fantastic thing about ANAM is how open and flexible the staff and faculty are to supporting each individual’s creative path.”

Her enthusiasm for the life she has chosen is palpable. “The most incredible thing about being a freelance, portfolio-based musician is that you design your own full-time job with combinations of what you are interested in and passionate about. Obviously, this has to be balanced with work that covers the rent. The most rewarding thing is when both those things line up together.”

She considers herself very fortunate to have “a wonderful teaching job at Carey Baptist Grammar for a few days a week”, along with a mixture of performance, project development, chamber music, education shows and workshops that keep things “exciting and fresh”.  She also accepts that one of the major challenges of this sort of lifestyle is “being your own boss” and therefore totally accountable.

“The work simply doesn’t get done if I don’t do it, and so I need to be very disciplined, balancing administration with practice and project development, while also trying to maintain a healthy lifestyle and still see my husband occasionally!”

Looking back at her ANAM years, her advice for current students is simple. “It is such a special time; you have the freedom to commit 100 per cent to honing your craft as a musician. Take every opportunity you are offered at ANAM, make meaningful connections with your peers as they will be your colleagues for many years to come, and practice as hard and intelligently as you possibly can. There is no other time in your life when you will have so much practice time and so many opportunities presented to you!”

In her three years in the music profession since leaving ANAM, Thea has acquired a string of credits that include a residency at Banff Centre for Arts and Creativity in Canada, a fellowship at the Bang on a Can Summer Festival, and being a finalist for the Freedman Classical Music Fellowship. She also co-founded Enyato Duo, a new music ensemble, with her ANAM contemporary Luke Carbon (clarinet 2016), focussed on commissioning new Australian works, and manages to juggle her teaching commitments with casual engagements as a member of the percussion sections of the Melbourne Symphony Orchestra and Orchestra Victoria.

This year has also featured a seven-week tour with Musica Viva in Schools performing Water Water Everywhere, a show developed with colleagues Leigh Harrold (piano 2004 and ANAM Associate Artist) and Luke Carbon, plus a number of tours with the MSO as a presenter with the show she developed for Education Week 2019, featuring Matthew Hindson’s Dangerous Creatures suite.

Meanwhile, Thea’s ensemble the Ad Lib Collective has recently developed a show with US-based ensemble MASARY Studios called Water’s Edge, which looks at the human impacts on the planet and how they have affected the natural balance of the world; they hope to bring this work to Australia during the next 18 months.  She also recently premiered a new show co-developed with composer Michael Sollis called the Milk Carton Confessions at the Extended Play Festival in Sydney. A theatrical work, it is focused on gesture, found sounds and singing, featuring newspaper, milk cartons and “lots of rubbish bins”.  With funding just secured to workshop the piece with a set and costume designer, Thea says she is “excited to see where that takes us!”

As for the definition of percussion being to strike forcibly? Indeed, that’s exactly what Thea Rossen is doing.

Does Thea have a favourite piece of music?

I couldn’t choose a single favourite piece… however, a work that has recently moved me deeply was Julia Wolf’s Anthracite Fields; it tells the story of coal miners in Pennsylvania at the turn for the 20th century, and seamlessly blends a contemporary take on the oratorio form with projected visuals. It was an inspiring work to see performed live by the Bang on a Can Ensemble. I have also recently discovered Partita for 8 Singers by Caroline Shaw, which is an incredibly powerful piece, written while she was on a residency at the Massachusetts Museum of Contemporary Arts.