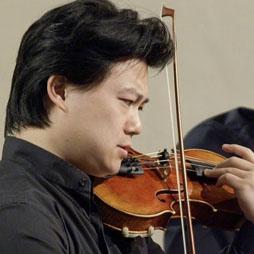 The story of Shane Chen (violin 2012) and his musical career has some of the trademarks of many violin virtuosi, with an early start on the instrument at age five, and recitals given at the Hong Kong Academy for Performing Arts (HKAPA) at only nine. But his journey took an unexpected and interesting twist, suggesting the influence of fate played a strong hand, or perhaps more aptly, a powerful up-bow.
Moving to Shenzhen (a city across the border from HongKong) from his hometown of Hangzhou, Shane made his debut as a soloist with the Hong Kong Medical Association Orchestra under conductor Yip Wing-sie. During his visit to HKAPA, he played for a number of professors and attracted interested from academics at Juilliard who invited him to audition. With limited experience of the western world (and not able to speak a word of English), Shane's parents reluctantly declined the offer for their son and he stayed in China to continue his violin study.
Due to a change in family circumstance and for various other reasons, Shane was without a teacher for 8 years, struggling to find the right match and contemplating a completely different career path.
He moved to Melbourne in 2001 to start a commerce degree, but continued to play violin, busking in the city streets. It was one fateful afternoon, busking in Melbourne, that a young lady approached him after he had finished playing. She had been an orchestral peer in Shenzhen, also studying cello at the HKAPA on scholarship, and had, after many years, recognised his face.
The pair eventually married and went on to have three children. Shane completed his Bachelor of Commerce and began working in logistics, but took a sabbatical after the birth of their second child. It was at this point that his wife encouraged him to pursue his true passion. Despite his lapsed training, Shane still successfully auditioned for a place at ANAM in 2011 starting his training again under Bill Hennessy.
Shane says that he learnt so much from his two years at ANAM, which is evident through the many impressive achievements he has earned so far. Not only was he a finalist in the incredibly competitive ANAM concerto competition, but was also one of three finalists in the 2012 ABC Symphony Australia Young Performers Award.
Since this time, Shane has become an extremely active chamber music player, and is a core member of both the Flinders Quartet and the Melbourne Chamber Orchestra.  He has appeared as a soloist with the Adelaide, Tasmania symphony, Melbourne chamber orchestras, and has been a regular guest with Orchestra Victoria.
Having now just won an audition for a full-time position with the Queensland Symphony Orchestra, this next move promises to be a new adventure for both Shane and his family.