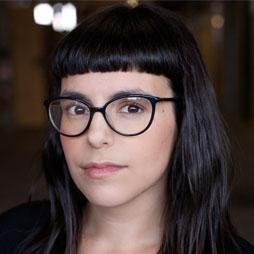 Madeleine Jevons (violin 2014) is a fireball of energy. A conversation with her can constitute the concentrated effort of playing Haydn in Bermagui at the Four Winds Festival, to the coordination and fitness required for professional pole-dancing.

You wouldn’t tell from her lovable swagger, that Mads suffered from serious imposter’s syndrome during her time at ANAM. Even after completing a Bachelor of Music Performance at the former VCA (2010), finishing an honours the following year, and receiving the Corinna D’Hage Mayer string scholarship, she admits to coming into the ANAM program feeling below par and is grateful that the panel took a chance on her, and credits an intense work ethic and former violin faculty Adam Chalabi as the primary reason she is leading the career she is today.

‘ANAM was the most full on time of my life’ Mads reflects. She warmly describes the organisation as a sphere to form your own identity as a musician, with the best teachers and best training. ‘If you can survive ANAM, you can survive anything’.

Not only did those years at ANAM provide the most intensely formative time for her technique and approach to playing, it was also the birthplace of the Penny Quartet, of which Mads is a founding member. As a freelance musician, it is obvious that the quartet is her first love. Although Mads has worked extensively with Orchestra Victoria, Melbourne Chamber Orchestra, Tasmanian Symphony Orchestra, Australian Chamber Orchestra, (with an ACO Emerging Artists position in 2015), and as a casual member of the Melbourne Symphony Orchestra, when thinking about the future it is the quartet that excites her most.

The Penny Quartet, named after Howard Penny (ANAM legend and trusted mentor) won the highly regarded Chamber Music Competition in 2014, which Mads says ‘lit a big fire underneath us’, making them even more determined.

Along with the quartet’s other violinist Amy Brookman, the two have spent the last couple of years building and managing the business aspects of the ensemble and have learnt by doing. When asked about the similarities of working in a small music ensemble to being in a relationship, Mads jokes that the quartet is currently enjoying a happy marriage.

Well for the audience’s sake, we wish them a long lasting wedlock, considering the accolades the group have already achieved. In their inaugural year, the Penny Quartet were nominated for the Freedman Fellowship award, were the proud recipients of the John and Rosemary Macleod Travelling Fellowship as well as winning the ANAM Chamber Comp. In 2015 they made their international debut as full scholarship holders at the St. Lawrence String Quartet seminar at Stanford, California, an experience that Mads describes as personally inspiring.

And speaking personally, besides violin and a new-found love for pole dancing, has she considered other careers? ‘Sure, there was one particularly rough day I walked out of ANAM and decided to give it all up to become a florist’, she jokes. Has she worked with flowers before? Of course not – although something suggests that this fact wouldn’t stop her.