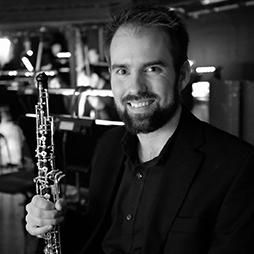 Childhood influences are often enduring, sometimes sparking lifelong passions. Since its premier in 1936, Prokofiev’s Peter and the Wolf has introduced generations of children to classical music and has doubtless guided many to a lifelong interest, but for Joshua de Graaf, the symphonic fairy tale for children put him firmly on a career path via the sinuous sound of the oboe.

Growing up in a musical family, classical music was always part of the household. Josh was a very small child when he first heard Peter and the Wolf but it soon became his favourite and was played so often that by the age of four, he’d singled out the oboe as his favourite instrument. Starting lessons at 12, he wasn’t thinking about a musical career, but at the end of his VCE year he opted for VCA instead of a general Arts degree and now can’t imagine what other path he might have taken.

After completing his undergraduate degree and an honours year, Josh’s acceptance into ANAM was “really good timing” as it marked the first year of the full time wind department. In typically self-deprecating style, he attributes his acceptance to good luck, as there were already two oboists there at the time of his audition, however “a spot opened up” and Josh’s place was assured.

The transition from VCA to ANAM took some adjustment and Josh remembers his first day nerves when he was asked to play an A Minor scale, and he played A Major instead... twice. “Just being in a new environment... even though I knew a few of the people (the woodwind community is fairly small, even around the country)... you have so many expectations about it but very quickly you settle in.”

Josh cites the main difference between being an undergraduate and going to ANAM is that “you are just performing and that’s it.” He says  VCA was a good course in terms of performance but ANAM is next level. “The other thing is that you’re there with just the cream of the crop really, you’re learning not just from teachers and staff members but you’re learning every day from your colleagues. You just immerse yourself in it.”

Josh’s segue from ANAM to employment seems enviably smooth:  after successfully auditioning for Orchestra Victoria in October of his second year, he “had a job waiting for me in February”, so must be one of the luckiest people in the industry. “Going to uni, going to a fantastic finishing school and not having to go overseas because the academy really is that here... we are so lucky to have overseas people coming in to mentor you, you have quality teaching.  It’s fantastic, and you’re surrounded by great musicianship.”

Even so, working with Orchestra Victoria presented a steep learning curve. Like most musicians starting their professional life, he says he was “young, a bit gung-ho, and you just think you’re going to get in there and do it” but the reality of learning an entirely new repertoire for ballet and opera with all the various musical styles that entails had its challenges. “You spend your life playing orchestral music and then you’re thrown into the world of Puccini, Verdi, Tchaikovsky, Minkus and Delibes and things... its totally different and you have to learn the language really quickly.  It’s the next challenge.”

Josh believes that today’s students seem “so much more prepared than I felt, just walking in as a baby into the orchestra”. He puts this down to a number of factors including a shift in the program regarding repertoire, which now seems “structured in a way by the Academy” rather than directed by the student and teachers which “probably goes a long way to preparing them because you don’t necessarily make your own choices in terms of where you’re comfortable, but you can get pushed outside of where otherwise you might go.” He also applauds initiatives such as the syndicate program as helpful in supporting and partnering musicians with “established people in society who can mentor them, or at least be a presence in their life.”

Josh clearly loves what he does and as a fully salaried member of Orchestra Victoria, his immediate future is more secure than many musicians can hope for, however he doesn’t see himself as “a lifer”. As with any profession, he feels the mental strength can sometimes waver for some reason and “those moments can be tough... you don’t want to be one of those people who resents coming to work, because there are plenty of jobs you can resent but this shouldn’t be one of them. I don’t want to hit 60 and then hold on for five years because you have to, and not love it.” He sees himself as “custodian of the chair” and while he doesn’t rule out going to another orchestra one day, it would need to be very specific because “I’m very happy with my role in the orchestra” and doesn’t see change on the horizon any time soon.

Over the last decade there have been some significant thrills in performance, chief of which is playing in two seasons of Wagner’s Ring Cycle, which means having played it in its entirety, as musicians are rostered in a single season due to its length. For Josh, it will always be one of those moments that he can say “that was a cool thing to do... you play the last chords and it’s just magic. You think… I’ve achieved this!”. Sometimes, he says, it’s just the context of a particular concert that makes it a highlight. One such moment was when the orchestra “was on the ropes and we played Beethoven’s seventh, and it was only at the NGV, not a big hall or anything, but it was just one of those moments where the context was everything... we’d been told the day before that they couldn’t guarantee our jobs the following year and then the orchestra just came out and played one of the most astonishing pieces of music and played it really well. They’re the moments that you live for.”

There’ve also been scary moments, such as when lights have gone out in the pit and the orchestra struggles on, playing in darkness. Josh says working predominantly with singers and dancers means there’s “double the risk”, however one memorable moment was again during a Ring Cycle when the whole set malfunctioned due to a motor breaking down and the show was delayed by an hour and a half.

Most musicians have a musical version of Mount Everest which they aspire to and for Josh it’s more Wagner, with Tristan and Isolde high on the list, along with Strauss’s Rosenkavalier and Stravinsky’s Rite of Spring in a ballet setting (he has already played this in a youth orchestra context).

While his orchestral life keeps him busy, life at home is hectic too. Josh met his wife Naomi, also an oboe player, at VCA and they married just prior to his starting at ANAM. She still plays freelance, but has recently retrained as a midwife. They also have three children under 10, the eldest of whom was born while Naomi was completing her ANAM studies and is still fondly referred to as an “ANAM baby” by their friends from that era. In addition, Josh is actively involved in the industry side of musicianship as the MEAA union rep. He sees orchestras as “fairly collegiate organisations” and while there’s a strong union presence it’s in terms of being “a really strong body for the industry as a whole” rather than “us versus management”.

With involvement in their local church and community added to the mix, there doesn’t seem room for anything else, so unsurprisingly, Josh likes to have quiet time at home in the Dandenongs rather than playing music and can often be found in their garden “just with the birds... that’s enough for me.” Pressed to nominate his favourite piece however, he is torn between the Beethoven symphonies, almost anything by Mozart, and Bach. In the end he nominates Bach’s Christmas oratorio, as he and Naomi walked down the aisle to the last chorus. “We had a bunch of friends singing and playing,... we roped them all in because we got married fairly young so we could still do that. That’s got a special place in our hearts.”

Asked for advice to current ANAM students, Josh has some wisdom to impart:

“The importance of studying all aspects of playing.  Not just solo playing, the art of subservient roles in the orchestra like second oboe/flute/violin etc where you’re not the main melodic part but you need to learn how to blend and support your colleagues. Recognising the utmost importance that role has, and the value, if you can do that well, that you can bring to the orchestra and the appreciation you will get from your colleagues, even if it’s not spoken, but they will really appreciate it. That’s what I tell uni students. In most cases that will be their first taste of professional life.

I love rock gigs. It comes back to why you play music and fundamentally it’s there for people to enjoy.  When you play one of those big gigs and you see the crowd loving it... I did a Nintendo game (Legend of Zelda) and we played these tunes from the game, which sold out two shows in Hamer Hall... just astonishing, and they loved it.  You have to enjoy it... you can look down your nose or you can just enjoy it.  Unless you’re having to do it every day and its getting you down... but that gets back to my initial point which is if you’re not enjoying playing this music, then you’re better off going to work in a bank or whatever.”

Joshua de Graaf is quick to attribute much of his success to good luck and good timing, however it’s clear that talent, passion and dedication are equal parts of the equation. Melbourne audiences can be grateful to Sergei Prokofiev for providing such profound inspiration.