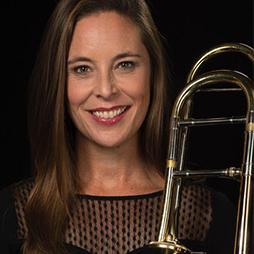 Her work as a leading orchestral musician is one thing, but Donna Parkes (trombone 1996) is also passionate about her work in the community – and long-distance running. Jennifer Gilchrist reports on her conversation with this outstanding performer.

Donna Parkes can’t have been much bigger than her instrument when she began trombone lessons at age nine, but as demonstrable proof that size doesn’t matter, her first choice of instrument turned out to be exactly the right fit.

While her parents weren’t especially musical, Donna’s older sister Kelly was an enthusiastic student of the trumpet, so while brass was a logical choice, it was the register and sound quality of the trombone that Donna was drawn to.

For Donna and her sister, growing up in Canberra meant access to excellent music programs at both primary and secondary school, and by age 12 the Canberra School of Music (CSM) had offered Donna a scholarship that enabled her to take private lessons. Looking back, Donna says the environment of the CSM was "incredibly inspiring" and credits it as the place where her "real love for classical music" began.

It’s no coincidence that great teachers tend to feature in the evolution of all great musicians, and in Donna’s case her first band teacher, Earl Winterstein, made a significant impact, along with her first trombone teacher Simone DeHaan, both of whom "really shaped and inspired me". She describes Earl as having "an infectious love of music and the perfect blend of expecting hard work and making it a great time as well". Once she began dedicated trombone tuition with Simone, her playing was elevated "from a raw beginning to a much higher level at a young age". She still feels privileged to have had such a love and dedication for music-making instilled in her "from the absolute beginning".

After high school, Donna enrolled to do an undergraduate degree at the CSM where she was inspired by the "amazing brass faculty" and the outstanding level of student playing achieved under the tutelage of its teachers Michael Mulcahy and Hector McDonald. In this environment, the decision to make music her career was more of a natural progression than a single moment of revelation:

"I travelled to the USA during my undergraduate degree; having lessons with the giants of the brass world like Arnold Jacobs opened up a new world of possibility for me. I saw the potential for my own growth and had a sense that if I was going to do this I wanted to see how far I could take it."

Admission to ANAM provided another stepping stone where she could experience the benefit of accessing new teachers and being surrounded by players at a high level. In particular, Donna says she gained a great deal at ANAM from hearing brass players from across the country and being challenged by new experiences. "Any environment that exposes you to great music-making is helpful and allows you to excel". Since then, her range of experiences has allowed her to developed the ability to take risks and challenge herself. "My ambitions have always been to put myself in the best possible musical environments and continue to refine my craft. What hasn’t changed is my desire to improve and find new ways to be a better overall musician".

There are countless challenges for performers, from instruments lost on flights ("they always turn up eventually") to being "runner-up for a job I really wanted" which, depending on the circumstances, can seem like a loss with serious implications for the future. Another major challenge lies in pursuing a career overseas, and it’s one that occurred early in Donna’s professional life.

"Having lived in the States for such a long time now I am grateful for all of the great opportunities it has given my career. I have built a life I love here; however, I still miss Australia and there is a certain piece of you missing when you live away from a country and still consider it home."

Challenges often lead to highlights and it’s easy for Donna to nominate one of hers as "playing an entire concert of John Williams’ music with him on the podium… he was gracious and inspiring and it was a wonderful concert." She also rates performing with the San Francisco Symphony at iconic Carnegie Hall, in "one of the best low brass sections I have had the privilege to play with".

The reality of life as a professional musician is, she says, a mixed bag. "The schedule can be difficult: taking real time away from your instrument is hard to do and we are often at the artistic mercy of conductors." Striking a healthy work/life balance can also be tough: "There is no limit to how much we practice or work on our craft, but we all need the right balance. I love distance running (eight marathons and counting) and having  that other passion has been really beneficial." For Donna, the positives vastly outweigh the negatives as a musician.

"We are lucky enough to have a career doing the thing we adore: creating art. And having the freedom and control over your craft, being part of the magnificence of the ensemble or orchestra. The way we can communicate to our colleagues and the audience is truly a gift. The ability to take your skill anywhere in the world and make an instant connection is the part I may just love the best."

Asked to revisit her 20-year-old self with some career advice, she doesn’t hesitate: "Keep enjoying the process at every stage… it will always work out!"  She is an advocate for “trusting the work you do and having the ability to truly enjoy it at the same time” and sees it as a very important part of the process. "Often, we get so concerned with practicing and excelling and what the outcomes will be, we tend to lose sight of why we actually play… because it’s fun. I would remind any musician they need to keep perspective and always retain the joy in their playing."

In typically understated manner, Donna describes her role of Principal Trombone with the Louisville Orchestra in Kentucky (a position she has held since 2008 and which she combines with teaching commitments) as “quite busy during the season”. She performs with her own chamber trio the Brass Hoppers when time permits, and has "additional gigs" as part of the festival and summer camp circuits in Alaska, Colorado and beyond.

Combined with her enthusiasm for distance running, it might seem that Donna has enough to be going on with for the foreseeable future, but further research reveals even more than she initially divulges. This year she was the recipient of the 2019 Ford Musician Award for Excellence in Community Service, for her work with hearing- and speech-impaired children at the Heuser Hearing and Language Academy. She is passionate about music education, and her outreach work with the Heuser Academy has had a significant impact on her life, delivering “a sense of fulfilment that resonated on a very emotional level”. In addition, Donna is part of the Louisville Orchestra’s Making Music series that brings music into schools, and with some of her colleagues she performs in the broader community – at homeless shelters, juvenile detention centres and aged care facilities.

Canberra has a reputation for hot air, but thanks to Donna Parkes, the kind associated with politics can take a back seat in favour of the type used to play the trombone. In a perfect world, everything coming out of our nation’s capital would sound this good.

Does Donna have a favourite piece of music?